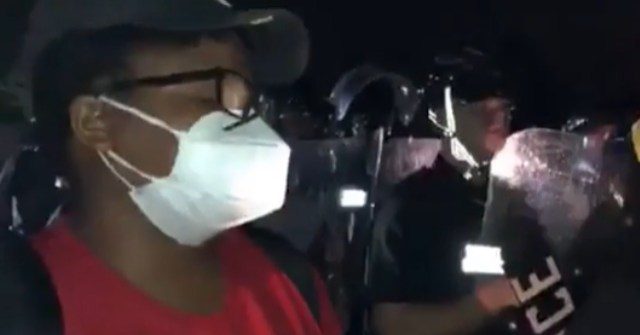 As protesters across the United States express their anger over the death of George Floyd, in many cases devolving into rioting and looting, one group of protesters in Washington DC locked hands and stood before White House police forming a human barricade to protect the officers.

In video footage from protests in Washington DC, protesters locked hands and formed a human barricade before White House police officers, protecting them from angry protesters who in turn criticized them for standing with the police.

Two women can be seen in the video, one wearing a red t-shirt that states “Make Racism Wrong Again,” the other woman’s shirt reads “BLACK – WHITE – HUMAN,” appearing to promote a message of unity. As the women, along with other protestors, lock hands and stand with their backs to the police, other protesters angered by their actions begin to question their motivation.

In the video, one man shouts at the woman in the red t-shirt “we here to make a point to show that this shit is not ok!” The woman replies “it’s not going to bring George Floyd back,” before later adding “this is not the answer,” referring to the violent protests.
Live updates on the protests across America can be found at Breitbart News here.