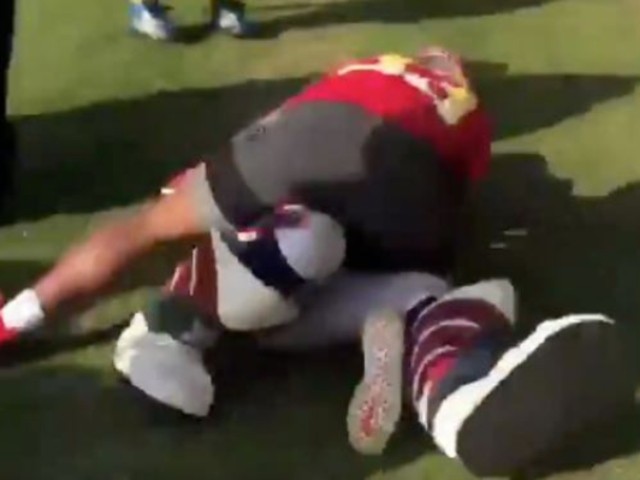 Last week, the Patriots mascot — “Pat Patriot” — was hanging out near a bunch of fans on the AFC side at the Pro Bowl. That’s when Jets safety Jamal Adams saw the mascot for his team’s hated rival, and decided to do what he does best: Hit.

On Thursday, Adams said the NFL was none too pleased about his unprovoked hit on the mascot.

“They’re not happy with me,” Adams told Dianna Russini of ESPN. The NFL is calling my phone, blowing me up, saying I put him in the hospital. So I have to go check on him. But do I regret it? No!”

Despite having no regrets, Adams did say that he had no intentions of actually hurting “Pat.”

“He [the mascot] was running around and everybody was booing him, so I said, ‘You know what? Let me go tackle him,’” Adams said, told ESPN via CBS. “I didn’t hit him that hard, man. All jokes aside, I didn’t hit him that hard. I don’t know what’s really going on, but they did tell me he’s in the hospital. My intention was never to hurt him. it was all about just a joke but I definitely want to check on him and make sure everything is good. At the end of the day we were out here just having fun and it wasn’t nothing intentionally to try to hurt the guy.”

However, according to NFL Network’s Ian Rapoport, despite Adams intention to not inflict harm, the mascot was pretty banged up:

Update on #Patriots mascot @PatPatriot following the leaping tackle from #Jets S Jamal Adams: The mascot is still dealing with jaw, neck, and back soreness and was checked for a concussion. As of this morning, he was still planning on being in Atlanta for the Super Bowl.

Another reason for Adams’ sudden regret over the incident could have  something to do with his wallet. Adams has a 4-year, $22.2 million deal with the Jets. If the mascot has suffered actual injuries, he could sue the Jets safety for a hefty sum.