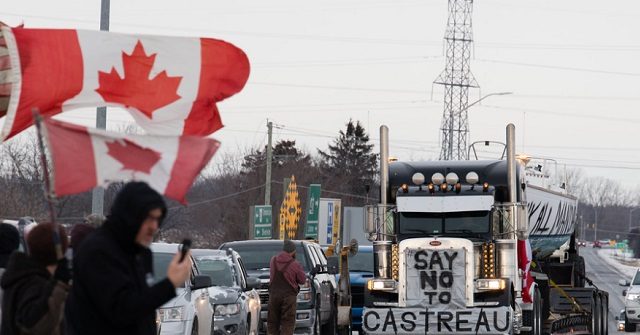 Dichter warned this effort by Canada’s Trudeau government could be something coming to the United States.

“It’s simple,” he explained. “I mean, we’ve seen Canada go from a country of Justin Trudeau’s promises of sunny ways into dark, authoritarian oppression and control. We want to do — we want two things. We want to get rid of the vaccine mandates, and the passports and the passports is — that’s really the concerning one. Yesterday, it was my first time ever crossing the border in my truck with my digital passport, and I held my phone up to the Border agent to give them the QR code. You know what he said to me? ‘Oh, it’s okay. I don’t need it.’”

“So, what do you mean you don’t need it?” Dichter continued. “He says, ‘Oh, your phone already popped up on my screen and is correlated with your passport?’ Can you think of that? Can you believe that? So they know everybody who is coming up to the border before they’re there, and they are tracking them. Now, maybe it is outlandish, but what’s to prevent the government from introducing that across Canada and not limiting it to just borders and you guys are getting it as well, and you can thank us for it because apparently, according to our sources, within the media, and within government, we have some close ties. Apparently, the Trudeau government — the Biden administration have no interest in it, but the Trudeau Government lobbied and requested the Biden administration to introduce this.”

“We don’t know why,” he added. “We don’t know the terms of the deal. Are they going to be trading Intelligence back and forth between Canada and the U.S. tracking cell phones? Of course, we have no idea. But this is where we’re going if this does not stop. That’s why this is the line. This is where it ends.”