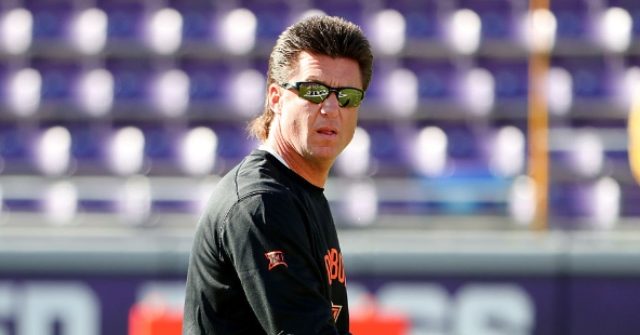 Oklahoma State coach Mike Gundy released a video on Tuesday, in which he apologized for any “pain and discomfort” he caused his players by wearing a One America News (OAN) shirt in a recent picture.

On Monday, star Oklahoma State running back Chuba Hubbard took his coach to task for wearing an OAN shirt in a recent pic from a fishing trip. Hubbard said he would “not stand” for his coach wearing the shirt.

I will not stand for this.. This is completely insensitive to everything going on in society, and it’s unacceptable. I will not be doing anything with Oklahoma State until things CHANGE. https://t.co/psxPn4Khoq

Initially, Gundy and Hubbard appeared together in a video in which Hubbard apologized for not speaking to his coach directly, as opposed to calling him out on Twitter. Though, Gundy promised “change,” he did not apologize in that video.

However, on Tuesday, Gundy appeared by himself in a video to apologize for the “pain and discomfort” he may have caused.

“I had a great meeting with our team today,” Gundy said. “Our players expressed their feelings as individuals and as team members. They helped me see through their eyes how the T-shirt affected their hearts. Once I learned how that network felt about Black Lives Matter, I was disgusted, and knew it was completely unacceptable to me. I want to apologize to all members of our team, former players, and their families for the pain and discomfort that has been caused over the last two days. Black lives matter to me. Our players matter to me. These meetings with our team have been eye opening and will result in positive changes for Oklahoma State football. I sincerely hope the Oklahoma State near and far will accept my humble apology as we move forward.”

Gundy’s “disgust” at OAN’s stance stands in stark contrast to Gundy’s statements from earlier this year when he first found out about the network.

“I tell you what’s funny is, I was flipping through stations,” Gundy said. “I found one — I don’t even know if anybody knows about this — it’s called OAN. It’s One America News. And it was so refreshing. They just report the news. There’s no commentary. There’s no opinions on this. There’s no left. There’s no right. They just reported the news. And I’ve been watching them the last week, because they’re given us the news and given us more information — in my opinion — some of the positives are coming out. So, that was refreshing.”

It was “refreshing,” at first, when Gundy didn’t apologize for wearing the shirt of a network that he clearly likes. It was less refreshing when he posted his surrender the next day. Though, unlike Drew Brees, at least Gundy hasn’t apologized multiple times in the same day.

Though, the day is not over yet.