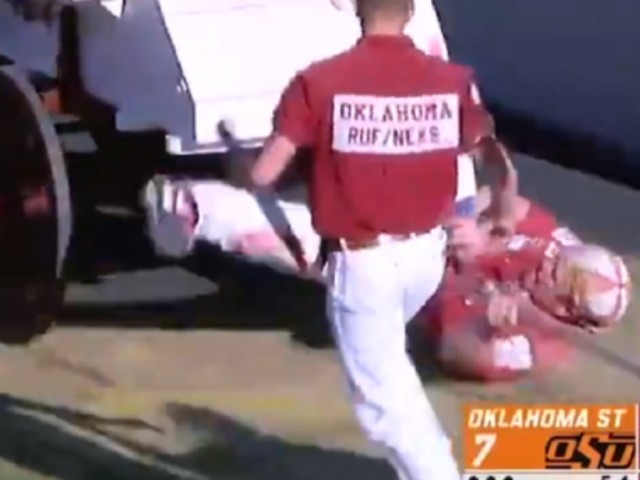 Few traditions in college football are more instantly recognizable than the Sooner Schooner, the horse-drawn wagon that rides out onto the field every time Oklahoma scores.

Though, while many recognize the horses and wagon, not all may be familiar with a particular aspect of that tradition. Specifically, the tradition of one of the the RUF/NEK’s (Oklahoma’s all-male cheer squad) hanging out the back of the Schooner while holding the OU flag.

However, after an incident that occurred while the Schooner made its rounds on Saturday, more people will undoubtedly be paying attention to the back of the wagon from now on.

As the Schooner was making its return trip to the tunnel, ABC cameras revealed that the RUF/NEK  who was hanging out the back was actually on the ground:

HOLD ON! HOLD ON! pic.twitter.com/MYN1QYmyUr

The fault lies not in the holder of the flag, but more with the other RUF/NEK charged with holding him. The man inside the wagon obviously lost his grip as the wagon made the turn. Some major trust rebuilding exercises will no doubt be necessary.