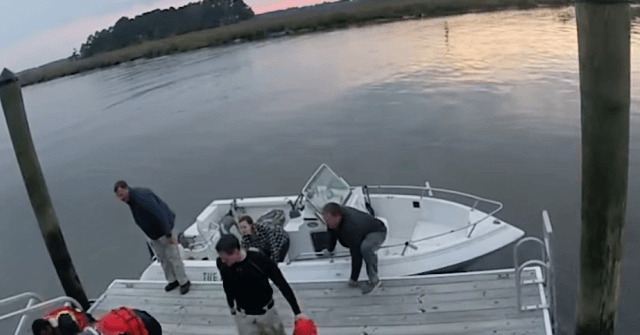 Body camera footage captured the moment police officers in Georgia rescued a woman from frigid waters after a 911 caller reported she had jumped off a bridge.

The incident occurred on Tuesday at the Forest River Bridge in Savannah located at Abercorn Street and Heroes Way, according to a release from the Savannah Police Department (SPD).

A citizen called 911 to report the woman’s presence on a bridge.

“Hi, I’m on the 204, and there is a lady that is on the bridge. She was hanging off,” the caller told the operator. “She doesn’t have any shoes on. I didn’t feel safe, you know, approaching her.”

SPD officers were dispatched to the scene at 5:15 p.m., but before they arrived, the 911 caller reported the woman had jumped.

Additional SPD officers were dispatched to the scene along with Chatham County Police Officers, firefighters, and EMS personnel, in efforts to locate the woman, the SPD said. Citizens pitched in with search efforts as well, allowing officers to search from their boats.

“After searching the area for some time, officers heard gurgling and found that the woman was under the water under the dock that some of them were standing on,” the release stated.

Body-cam footage shows Officer Coleman standing on the dock as murmuring can be heard in the background.

“Hey, she’s down here!” Coleman says as he points below the dock.

The officers attempted to pull her up to the dock, but they were unsuccessful in their efforts, according to the SPD.

“Understanding that time was of the essence and the woman had been under the freezing water for some time, two officers – Sgt. Sharif Lockett and Officer William Fitzpatrick – jumped into the water and collectively worked to pull the woman onto the dock,” the SPD said.

“For me, this is definitely one of the top three challenges I’ve faced since I’ve been on,” Lockett said per WTOC.

EMS treated the woman at the scene. Her condition and identity have not been made public, the News & Observer reports.

“We are so proud of all of the officers involved for their joint rescue actions,” said Savannah Police Chief Roy Minter.

“It was definitely a team effort for all officers, first responders and citizens involved — from the extensive search to the rescue,” he continued. “We know that had these officers not responded and acted so quickly that this could have had a tragic outcome.”