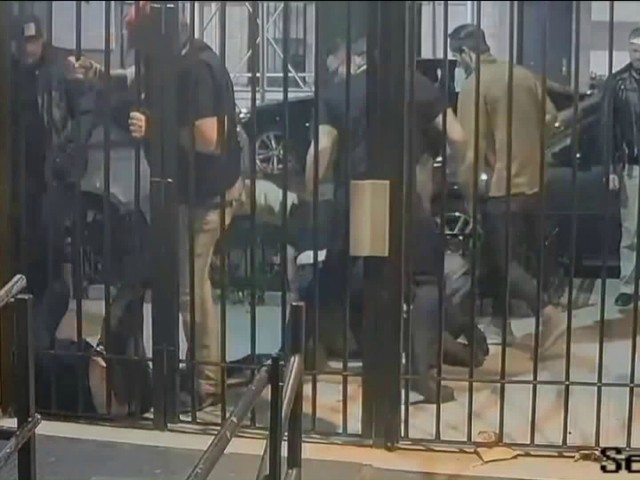 Police also announced they are searching for a dozen people involved in the ruckus, according to NY1.com:

Police officials said nine of the people they were searching for are members of the Proud Boys, and three are from Antifa, a far-left anti-fascist group.

According to the police department, three Antifa members were arrested for a separate incident on 84th Street, where a Proud Boys member’s backpack was stolen.

The NYPD is asking anyone with information on the fights to come forward and said it was investigating if the attacks were hate crimes.

The #NYPD is looking for 12 people after this fight broke out Friday on the #UpperEastSide. It happened after a private Republican club hosted a speaker from a far-right group. https://t.co/99mhDF8AxF pic.twitter.com/pJ5NKOsF68

The video release comes after the police were criticized for not putting a stop to the fighting and not making more arrests on Friday, but the agency is defending its tactics, and Democrat Gov. Andrew Cuomo blamed Republicans in the state for the violence.

“There’s a difference between being provided information and having a prosecutable case,” Dermot Shea, chief of detectives at NYPD, said at a press conference.

“According to the police department, three Antifa members were arrested for a separate incident on 84th Street, where a Proud Boys member’s backpack was stolen,” NY1 reported.

In a conference call with reporters, Cuomo said Republicans knew the McInnes invitation could spark violence.

“The state Republican Party organized this,” Cuomo said. “They may be trying to lie about it today but they can’t because it’s in writing and it’s clear. And I have called for, and I repeat today for every Republican elected official to repudiate the Proud Boys.”

“You have proven yourself to be unworthy of your responsibilities,” Johnson said.

Breitbart News obtained a threatening letter Antifa sent the club as well as an exclusive statement Republican officials released regarding the violence.

“Tonight, we put the Republican Party on notice,” the Antifa letter begins, labeling McInnes a “hipster-fascist clown” and accusing the club members of “treachery against humanity.”

“Our attack is merely a beginning. We are not passive, we are not civil, and we will not apologize,” the letter continues. “Those of good conscience and clear mind know this state of oppression cannot remain.”

A full statement from the club reads:

Last night the Metropolitan Republican Club was vandalized by the leftist hate group Antifa, who also left a note promising ‘this is just the beginning’ and threatening more violence. Republicans are a minority party in NYC by a wide margin, and while most city residents are respectful of our activities, our grassroots efforts are often met with hostility. Last night’s shameful assault by Antifa cowards represents a tragic new low, and is sadly only the most recent example of leftist violence and aggression against the conservative movement. But rest assured that we will not be intimidated by violence, threats, or hate speech. We will continue to fight for freedom and liberty here in New York City and all across this great nation.

Windows were shattered, and the historic building’s exterior was defaced.

“I cannot recall something like this,” Cox told the New York Times’ Shane Goldmacher. “Whoever these people are, we don’t want to be part of getting their message out. They don’t deserve it.”