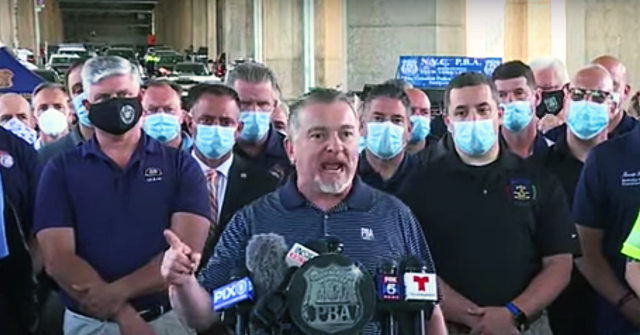 O’Meara, president of the New York State Association of Police Benevolent Associations, lashed out at elected officials and the media for invoking fear and hatred towards police officers — specifically in the black American community.

Every year, O’Meara noted, police have about 375 million interactions with the public with “overwhelmingly positive responses.”

“But what we read in the papers all week is that in the black community, mothers are worried about their children getting home from school without being killed by a cop,” O’Meara said. “What world are we living in? That doesn’t happen. It does not happen.” He continued:

Our legislators are failing us. Our press is vilifying us. Stop treating us like animals and thugs and start treating us with some respect. That’s what we’re here today to say. We’ve been vilified. It’s disgusting … trying to make us embarrassed of our profession.

“I am not Derek Chauvin. They are not him,” O’Meara said, pointing to police officers behind him. “He killed someone, we didn’t. We are restrained. We roundly reject what he did as disgusting. It’s not what we do.”

While Mayor Bill de Blasio has vowed to cut funding for the New York City Police Department (NYPD), violent crime in the city has surged despite continuing to be in semi-lockdown over the Chinese coronavirus crisis.

Over the last month, for example, murder has jumped more than 94 percent compared to the same time last year. Burglaries — now that suspects can be freed with0ut paying bail — have increased almost 34 percent in the last month compared to 2019.