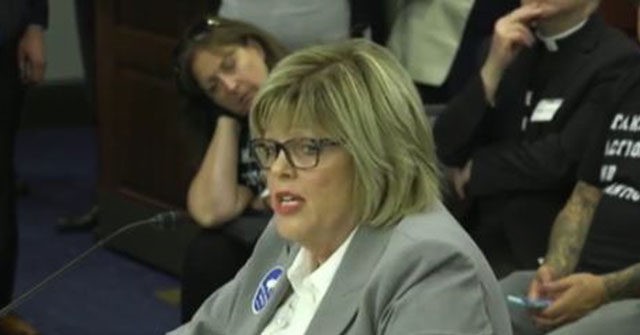 Registered nurse Jill Stanek testified before a House committee that she cared for an infant with Down syndrome who had survived an abortion and was left to die in the hospital’s “soiled utility room.”

In her prepared testimony on the Born-Alive Abortion Survivors Protection Act, Stanek, who now serves as national campaign chair at the pro-life Susan B. Anthony List, described an incident 20 years ago when she worked at Christ Hospital in Illinois.

“In the event a baby was aborted alive, he or she received no medical assessments or care but was only given what my hospital called ‘comfort care,’” Stanek continued.

Calling attention to the fact that babies do, indeed, survive abortions, Stanek described a significant incident:

One night, a nursing co-worker was transporting a baby who had been aborted because he had Down syndrome to our Soiled Utility Room to die – because that’s where survivors were taken.

I could not bear the thought of this suffering child dying alone, so I rocked him for the 45 minutes that he lived. He was 21 to 22 weeks old, weighed about 1/2 pound, and was about the size of my hand. He was too weak to move very much, expending all his energy attempting to breathe. Toward the end he was so quiet I couldn’t tell if he was still alive unless I held him up to the light to see if his heart was still beating through his chest wall.

After he was pronounced dead, I folded his little arms across his chest, wrapped him in a tiny shroud, and carried him to the hospital morgue where we took all our dead patients.

As she wrote in a column at LifeSiteNews, a spokesman told the Chicago Sun-Times “between 10 percent and 20 percent” of aborted babies with genetic defects “survive for short periods outside the womb.”

“From what I observed, it was not uncommon for a live aborted baby to linger for an hour or two or even longer,” Stanek testified. “One abortion survivor I was aware of lived for almost eight hours.”

Of 16 babies Christ Hospital aborted during the year 2000, four that I knew of were aborted alive. Each of those babies – two boys and two girls – lived between 1-1/2 and 3 hours. One baby was 28 weeks’ gestation – 7 months old – and weighed two pounds, seven ounces.

Stanek used this incident to refer back to the words of Virginia Gov. Ralph Northam (D), who said during an interview in January that an abortion bill introduced in his state’s House of Delegates would permit an “infant” to be “delivered” and “resuscitated, if that’s what the mother and the family desired,” until the physicians and mother discussed whether the baby should be allowed to live or die.

VA gov on abortion this morning:

“When I heard Virginia Gov. Ralph Northam, a pediatric neurologist, describe during an interview the process by which doctors determine to shelve unwanted newborns to die, it hit painfully home to me,” Stanek told committee members during the hearing. “He said, quoting, ‘If a mother is in labor, I can tell you exactly what would happen. The infant would be delivered. The infant would be kept comfortable. The infant would be resuscitated if that’s what the mother and the family desired.’”

“Gov. Northam was right,” she said. “That is exactly what happens.”

House Speaker Nancy Pelosi (D-CA) and other Democrat leaders have blocked a vote on the bill more than 80 times.

Scalise and Wagner filed a discharge petition on the legislation in April. All 197 House Republicans, but only three Democrats, have signed onto the petition. In order to bypass Pelosi and force a vote on the Born-Alive Act, House Republicans need 17 more signatures — which they hope to obtain after the hearing presents the facts to Americans, provided by experts on abortion.