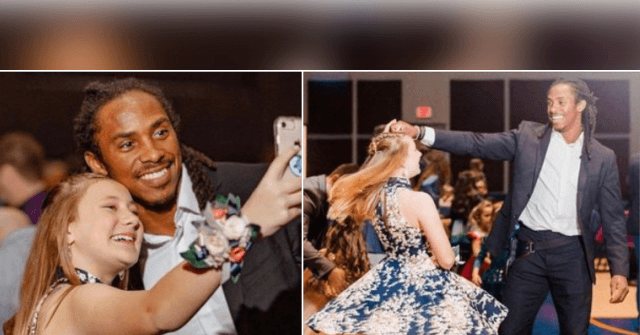 A Philadelphia Eagles player went the extra mile and then some for a Texas girl who recently experienced heartbreak.

But when the time approached for her school’s daddy-daughter dance, her mother, Holly, contacted her favorite NFL player, Eagles safety Anthony Harris, for assistance via social media.

“I told him about the situation, and surprisingly he was more than willing to do it,” Holly said during an interview on Fox & Friends. “It happened really fast. He said yes probably about a week before, so it was kind of a whirlwind.”

The young man even paid for Audrey’s dress, shoes, hair, and makeup for the special night out.

“She just felt like a princess all night,” Holly recalled.

In a social media post January 28, she shared photos of the pair with big smiles on their faces enjoying the dance:

I’m still at a complete loss of words, and I don’t think I’ll ever really grasp how incredible this night was. Audrey…

“This was truly a night to remember, and I don’t think I’ll ever fully wrap my mind around it,” she wrote.

Although Audrey initially felt nervous about meeting her date, he eased her nerves by asking questions and chatting about football.

“I was very nervous because I didn’t know what I was going to say,” she commented. “At first it was kind of awkward because we weren’t talking yet… But then he kind of came up and started talking to me.”

Meanwhile, Holly shared her thanks for Harris’s kind gesture in the aftermath of such a difficult year for the middle schooler.

“I was so anxious and excited for her because she just had the most terrible year,” she noted. “For someone to show up and to teach her that people do show up for you, it’s just been beyond a blessing.”

“Just the power of God and how he makes these situations happen has just been unbelievable and remarkable,” she added.

Following the event that took place near Austin, Harris said he was simply trying to be a human: