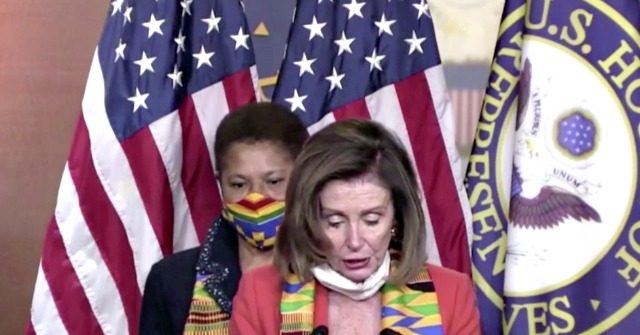 House Speaker Nancy Pelosi addressed reporters on Monday,and botched the names of blacks killed by police, mangled words, and called one of her longtime Democrat colleagues by the wrong name.

While attempting to make a rhetorical connection between the treatment of slaves and what happened to George Floyd, Pelosi said, “The purchase of those slaves, condungeons in which they were kept,” seemingly mashing “conditions” and “dungeons” together.

The Speaker talked herself into circles as she mixed up the titles of Sens. Kamala Harris and Cory Booker.

During a dramatic reading of the names of black victims of alleged police violence, Pelosi botched several of the names, including Philando Castile and Trayvon Martin.

Except, there is no Bobby Smith. There’s a Bobby Scott, who has been Pelosi’s colleague for some 27 years.

The House Speaker denounced “porice blutality,” and stumbled during her call for Senate Majority Leader Mitch McConnell to pass the bill and President Trump to sign it.

“In the coming weeks, the bill— the House will hold hearings, mark up the bill. Once the House passes it, the House, uh, the Justice and Policing Act, Leader McConnell will sith— hopefully, he must swiftly take it up,” she said.

“Leader in the Congress— the President must not stand in the way of justice,” Pelosi added.