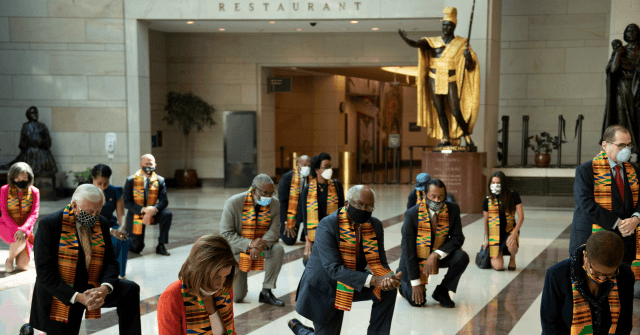 Democrat lawmakers, including House Speaker Nancy Pelosi (D-CA), took a knee and corresponding moment of silence for 8 minutes and 46 seconds in Emancipation Hall at the U.S. Capitol on Monday in honor of George Floyd and to “respect the actions of the American people to speak out” against the “consequences” of slavery and racism “specifically manifested in police brutality.”

Prior to the moment of silence, Pelosi noted that Democrats, under the leadership Congressional Black Caucus (CBC) Chairwoman Karen Bass (D-CA), traveled to Ghana last summer to “observe the 400th anniversary of the first slaves coming across the Atlantic.”

“We are here to honor George Floyd,” the speaker said, adding, “and so many others who lost their lives and were abused by police brutality.”

Pelosi read off a host of names, including Breonna Taylor, Ahmaud Arbery, Freddie Gray, Michel Brown, and Trayvon Martin, before those in the hall, donning Kente cloth scarves, collectively took a knee.

The speaker struggled to get up following the conclusion of the moment of silence.

“It’s hard to get up,” she said, reaching for help. “It’s better not to have high heels.”

“That was an eternity,” someone off-camera said.

“You see how long it was to have that knee on his neck,” Pelosi said, seemingly out of breath.

Pelosi furthered her remarks during a subsequent presser, looking around and stating, “My members will attest. It’s a very long time.”

“Today this moment of national anguish is being transformed into a movement of national action as Americans from across the country peacefully protest to demand an end to injustice,” she said, failing to mention in that moment the violence that has permeated many of the protests and instead touting the Democrats’ latest police reform bill, the Justice and Policing Act: