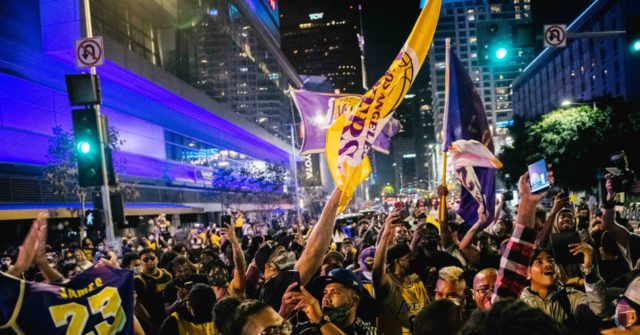 Los Angeles Lakers fans partied outside the Staples Center in downtown L.A. on Sunday night, with no social distancing and few masks, after their team won its first NBA title in ten years.

This is the city that won’t allow my children to go to school—even distanced, with masks, desks cubicled with plexiglas. https://t.co/AIuVWFz9jB

Outside of Staples Center. Police are directing fans to stay on the sidewalk: https://t.co/OeCnE0pNql pic.twitter.com/5pysM9mRRn

The crowd was described as “mostly peaceful,” though “several people could be seen on local TV broadcasts trying to kick in the windshield of an LAPD cruiser,” the Los Angeles Times noted.

Large rowdy crowd start hitting LAPD police cars near the Staples center during the Lakers celebration. It was soon after this that an unlawful assembly was declared. Filmed at approximately 8:20pm. #DTLA pic.twitter.com/7ZcAzcXSoq

Police eventually broke up the party outside the Staples Center and arrested those who refused to leave.

The title came as the fulfillment of fans’ hopes following the arrival of LeBron James in 2018, and a consolation after the untimely death of retired Lakers great Kobe Bryant in a helicopter crash early this year.

The shortened season and postseason were played in a “bubble” in Orlando, Florida, without any fans in attendance due to fears of spreading the coronavirus.

L.A.’s political leaders, including Mayor Eric Garcetti, have been particularly proud of the severity of their coronavirus restrictions, including one of the earliest mask mandates in the country.

Those restrictions, however, were dropped for Black Lives Matter protests (and riots) earlier this year — and for the NBA championship.