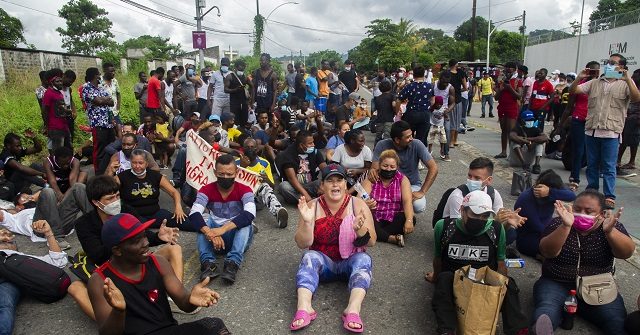 A group of migrants are having their mouths sewn shut to protest Mexico’s immigration and border security policies. Some left small gaps in their lips to allow for drinking water.

Shocking video from Reuters shows a group of migrants having their mouths sewn in protest of the Mexican government’s refusal to allow them to enter and move through that nation, the New York Post reported. Protest organizers appeared to use a needle and plastic thread.

“I’m doing it for my daughter,” Venezuelan Yorgelis Rivera told Reuters. “She has not eaten anything in the last few hours and I see no solution … from the authorities.” She said they feel like prisoners after waiting for more than a month for a response from Mexican immigration officials.

Photos from Reuters photojournalist Jose Torres can be found here.

The Post article shows a series of photographs which appear to show migrants from multiple nations taking part in the protest.

“The migrants are sewing their lips together as a sign of protest,” said Irineo Mujica, an activist at the demonstration, Reuters reported. “We hope that the National Migration Institute can see that they are bleeding, that they are human beings.”

Mexican immigration authorities are holding thousands of migrants in camps in Tapachula, Chiapas.

“It is worrying that these measures have been carried out with the consent and support of those who call themselves their representatives, with the intention of pressuring authorities on an attention already provided,” Mexican officials said in a statement responding to the protest.