MORELIA, Michoacán – A businessman claims state cops tried to kill him when he attempted to speak out against corrupt law enforcement. He is demanding the Michoacán government investigate the matter and stop protecting dirty lawmen.

In a video obtained by Breitbart Texas, a businessman who only identified himself as “Carlos” claimed he was taken in the coastal city of Lazaro Cardenas. The businessman identified two high-ranking officers with Michoacan’s State Police for being the masterminds behind his violent kidnapping.

The two cops named by the businessman are Jose Luis Porras Vasquez, the Director for Investigations and Analysis for the Ministerial Police, and Roberto Arturo Tapia Vasquez, who is an agent assigned to the apprehension teams.

The man claimed to have a business that provided industrial pest control. On October 30, he was on his way to work when he stopped at a local gas station and was kidnapped by a team of gunmen. Carlos claimed that he was forced to give up his life savings for his release. He had tried to move on after the kidnapping, but noticed suspicious vehicles following him in the days after his release.

The businessman claimed that he decided to drive to the Michoacán Attorney General’s Office to file a complaint. Along the way, he was ambushed by gunmen who shot at him repeatedly in a failed attempt to kill him. Soon after the attack, Carlos packed his belongings and tried to flee the city only to be ambushed again, however, he claimed he was able to reach a military checkpoint manned by marines–who escorted him out of the city and has since gone into hiding.

Toward the end of the video, the man asks Michoacán Governor Silvano Aureoles Conejo to stop covering for corrupt cops in Lazaro Cardenas. The video ends with various images of Carlos’ truck and the shots it sustained. 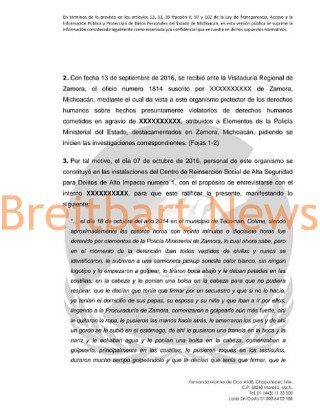 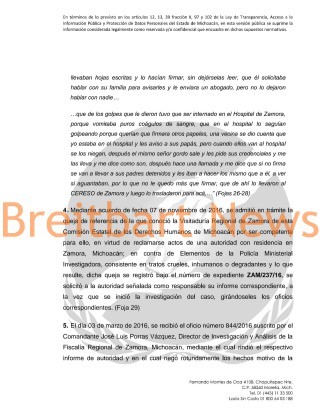 Breitbart News obtained report 034/2017 from the Michoacán Human Rights Commission where victims identify Porras as being behind the 2014 kidnapping and torture of a group of individuals in the town of Zamora, Michoacán. The documents describe how the victims were beaten, suffocated, and abused into signing false confessions. In response to the complaints against him, officials moved Porras from Zamora to Lazaro Cardenas.

Editor’s Note: Breitbart Texas traveled to the Mexican States of Tamaulipas, Coahuila, Nuevo León and other areas to recruit citizen journalists willing to risk their lives and expose the cartels silencing their communities. Breitbart Texas’ Cartel Chronicles are published in both English and in their original Spanish. This article was written by Jose Luis Lara, a former leading member who helped start the Self-Defense Movement in Michoacán.