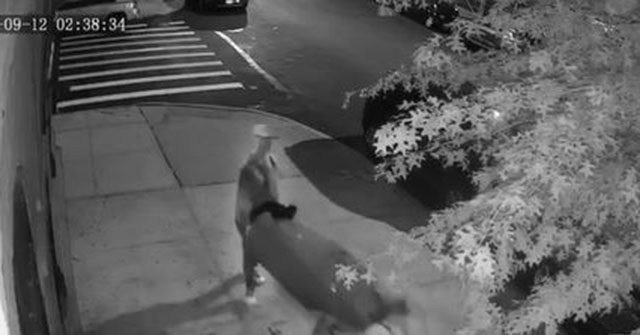 Two men were caught on camera pushing a shopping cart with a dead body inside along a sidewalk in the Harlem neighborhood of New York City on Thursday morning.

Surveillance footage shows the two individuals wearing baseball caps as they drag a Target shopping cart with a corpse rolled up in a carpet and laid in the basket down the sidewalk near West 145th Street and Bradhurst Avenue around 2:30 a.m.

In the video, the man pulling the cart turns his head periodically to direct the other man pushing the cart. The footage also shows an oblivious cyclist pass by as the two continue to move the cart along the street, the New York Post reported.

Hours later, a passerby on his way to the gym for his morning workout spotted the body because he noticed two feet with socks on protruding from the red carpet. The witness called the police, who found the unconscious and unresponsive man with signs of head trauma and wrapped in a cardboard box inside of the carpet.

Israel Savage, 39, described what he saw to reporters.

“I saw two feet — what appeared to be feet, they had socks on them — hanging out of a trash bag,” he said. “There were multiple trash bags around this package, some cardboard and a carpet. And it was all taped. It was heavy, so that made me suspicious that maybe it’s not a mannequin.”

“We have some potential wounds to the head, the medical examiner is on scene, and we’ll have to wait for an official autopsy,” Shea commented. “We’ll go from there.”

When the carpet was removed from the body, authorities said they found the man, who appeared to be in his 20s or 30s, wrapped in a plastic bag and fully clothed, wearing gray sweatpants and a t-shirt. However, authorities said he had no identification on him.

So far, no suspects have been arrested in connection with the dead body, but reports said police were focusing on a nearby apartment building. However, it is not clear what connection the building has with the alleged incident, according to ABC 7.