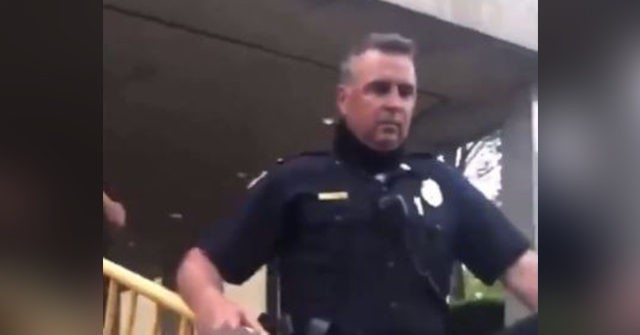 A Lowell, Massachusetts, police officer declined to kneel despite a bombardment of “take a knee” chants from a crowd of protesters on Wednesday.

The officer remained standing as the man continued, “I’ll pray for you right now,” while background protesters began shouting, “Take a knee!” Peaslee nodded in appreciation but moved backward to stand with his fellow officers rather than submitting to the chorus of demands.

A round of applause for these cops in Lowell, Massachusetts who refuse to bend a knee to the protestors.

RT to show appreciation for these strong officers! pic.twitter.com/vyeTxzBc0i

Peaslee is among officers nationwide facing calls to kneel as a means of demonstrating support for those protesting the death of George Floyd at the hands of Minneapolis police on May 25.

In Massachusetts, videos circulating online indicate an array of responses from officers — from those like Peaslee who remain standing, to Boston officers kneeling, to a Webster police chief going as far as laying on the ground. The acquiescence in the Webster instance was met with mostly brutal criticism from commenters, who viewed the act as kowtowing to “degrading” demands.

In Lowell, the protesters remained peaceful despite the officers maintaining their upright stance. The Lowell Police Department could not be reached for comment on the video.

The man in the video who had sparked the kneeling chants spoke into a megaphone in an apparent mix of prayer and words to the cops, saying, “We have people in front of us here today that might not kneel with us, but can you change their mindset, God? … You can say you stand with us, but we need you to show us you stand with us.”