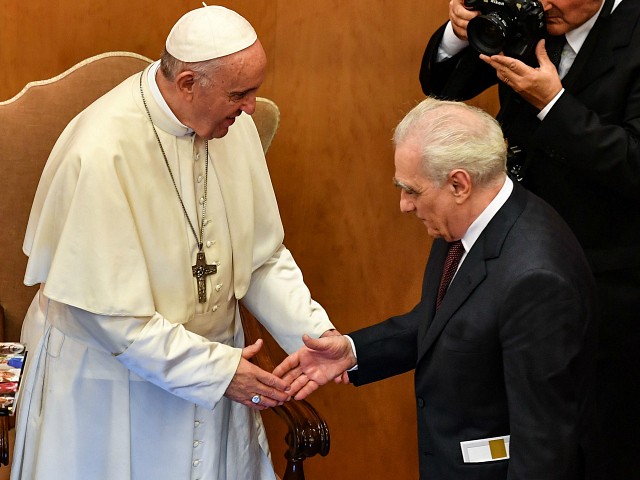 ROME — Hollywood director Martin Scorsese told Pope Francis Tuesday that the world of today is “marked by evil” and asked him how elderly people can “strengthen and guide the young.”

Mr. Scorsese, whose 1988 film The Last Temptation of Christ provoked protests from Christian groups for its alleged blasphemy, was invited to address Pope Francis at a book presentation of Sharing the Wisdom of Time on the occasion of the Synod of Bishops on Young People.

“Holy Father, I’ve been making movies for a long time now, but I grew up in a working-class neighborhood in downtown New York,” said the director, who was raised Catholic. “There’s a church there, Saint Patrick’s old cathedral and it’s still there. It’s the first Catholic cathedral in New York and I spent a lot of time in that church, but outside the church, things were very different. There was poverty and violence.”

“I experienced that there was a truth in the street and that there was a truth presented to us in the Church and that they weren’t or didn’t seem to be the same and it was very, very, very difficult to put the two of them together, to reconcile the two worlds,” he said. “Jesus’s love seemed something that was completely apart, or like foreign, alien often to what I was seeing on the street. True, I was fortunate to have good, loving parents and an extraordinary young priest who became kind of a mentor for myself and others during those formative years.”

“However, even today, when we look around at newspapers and television, it seems that the world is marked by evil. We also see the painful human failings of the institution of the Church itself,” he said.

“How can we elderly people strengthen and guide the young in what they have to go through yet in life,” he said. “How, Holy Father, can the faith of a young woman or man survive in this maelstrom? How can we help the Church in this endeavor?”

In his reply to Mr. Scorsese, Pope Francis said that the key is to teach young people that cruelty is the “wrong path,” helping them to have the “wisdom and gift to cry in the face of so much violence, cruelty, [and] destruction of human life. To cry is human and Christian.”

The pontiff suggested that the path is marked by “empathy, closeness, non-violence, tenderness, all human virtues that seem small but are capable of putting an end to the most violent of events.”

This was the second time the pope has granted an audience to Scorsese. In 2016, the pope met with the director in preparation for the Rome premiere of his film Silence, about a conflicted Jesuit missionary in 17th-century Japan during violent persecutions of Christianity.