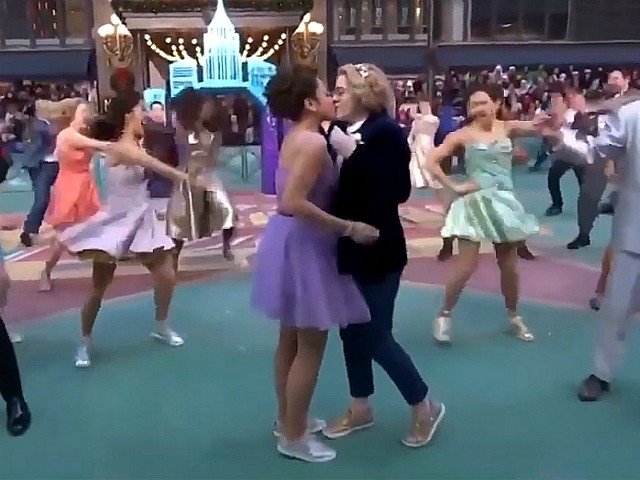 The Macy’s Thanksgiving Parade broadcast two members of the same sex kissing on national television Thursday, making it the first time the parade featured a same-sex kiss in its 94-year history.

The annual parade — which features life-size balloons, floats, and sneak previews of Broadway performances— has been a tradition for many in New York City and for the millions of Americans who’ve watched the parade on television since 1924.

But this year’s parade took a different tone when actresses Caitlin Kinnunen and Isabelle McCalla locked lips during the live NBC broadcast during a performance of a musical number from the recently released Broadway musical The Prom.

So proud. So thankful. pic.twitter.com/DGTYNsJhxB

A video of the performance showed Kinnunen and McCalla holding hands and singing before the two leaned in for a kiss at the very end of the song.

The Prom began its Broadway run this month, telling the story of a lesbian in small-town Indiana who cannot take her girlfriend to her high school prom, and the queer actors that come into Los Angeles to support the couple.

The musical’s producers said the show is a story of “acceptance, tolerance, and love.”

“Broadway’s The Prom is grateful to Macy’s and NBC for their acceptance and inclusivity of a community and a story that is about acceptance, tolerance and love,” the musical’s producers Bill Damaschke, Dori Berinstein, and Jack Lane told Entertainment Weekly in a joint statement.

While supporters of gay rights cheered for the on-screen kiss, some parents expressed concern that the kiss was not age-appropriate for younger viewers watching a parade meant for families.

So watching the @Macys Thanksgiving Day Parade with the fam and they just had 2 girls kiss at the end of one of the dance/singing acts. #Unbelievable why do these networks feel the need to make sure they show their support for the gay community. Not something kids need to see.

#macysthanksgivingdayparade Just had 2 girls kissing. Could have had a warning so parents could be aware!!!! Poor choice #NBC

The Prom is currently playing at the Longacre Theatre in New York City.