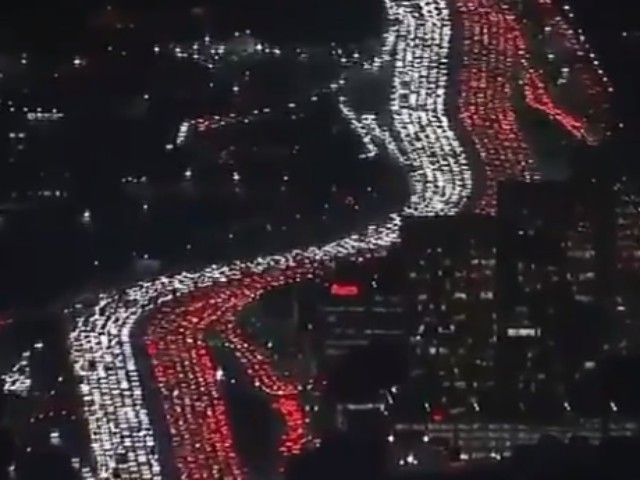 The Evening Standard reports that officials estimate roughly 50 million people will travel by car during the holiday – the largest number of Thanksgiving travelers in over a decade. The number of travelers in 2018 is up 4.8 percent from the previous year.

Woah. #Thanksgiving Eve Eve traffic in #LosAngeles is no joke… and look at that sunset! 😍 #fox10phoenix pic.twitter.com/5bBX4OVSY3

This holiday travel thing is not a joke! Can’t believe the traffic to get to MSP airport terminal 1! pic.twitter.com/NZKGuoBRwh

While Los Angeles’s bump-to-bump traffic is raising eyebrows on the road and online, New York City, San Francisco, and Boston are forecast to experience the worst delays in the county. Transportation analytics firm INRIX said some trips could take approximately four times longer than average.

Travel experts believe the United States’ booming economy may contribute to increased congestion on the roads this year.

“Consumers have a lot to be thankful for this holiday season: higher wages, more disposable income and rising levels of household wealth,” AAA Travel senior vice-president Bill Sutherland said. “This is translating into more travelers kicking off the holiday season with a Thanksgiving getaway.”