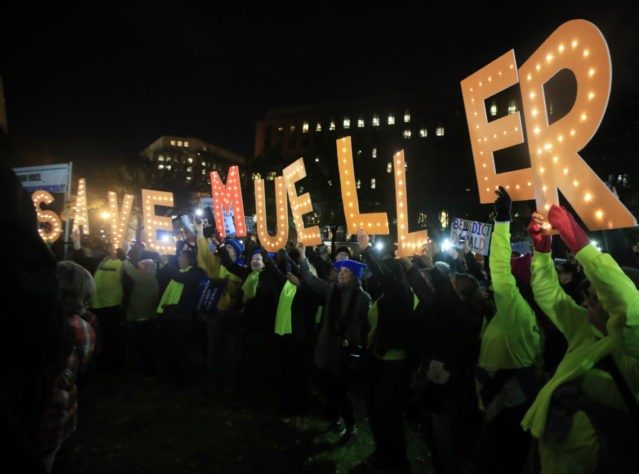 Protests are taking place around the country Thursday night, organized by the leftist MoveOn and other anti-Trump organizations, including in Washington, DC, and New York City in response to President Donald Trump’s decision to ask for Attorney General Jeff Sessions’ resignation.

Protesters believe Sessions’ resignation will lead to the undoing of Special Counsel Robert Mueller’s investigation into alleged collusion between Russia and the Trump presidential campaign.

Sign up now to find a protest near you: https://t.co/RAfE4MYSz4 pic.twitter.com/NEY5spFyRB

So far the probe has resulted in some indictments and convictions but nothing tied directly to the president.

Right now: People are gathering in Times Square to protest President Trump’s firing of Jeff Sessions. The rally will begin here, with a march down 7th Ave. to Union Square. I’ll be covering for WNYC. pic.twitter.com/XiyO5qvb6N

The Nobody Is Above the Law website states about the protests:

Our hundreds of response events are being launched to demonstrate the public demand for action to correct this injustice. We will update this page as the situation develops.   — Donald Trump just crossed a red line, violating the independence of the investigation pursuing criminal charges in the Trump-Russia scandal and cover-up. Trump putting himself above the law is a threat to our democracy, and we’ve got to get Congress to stop him. We’re mobilizing immediately to demand accountability, because Trump is not above the law.

It is not clear how long Whitaker will be the acting attorney general, as a discussion about a permanent replacement is underway at the White House in the wake of Sessions’ resignation.