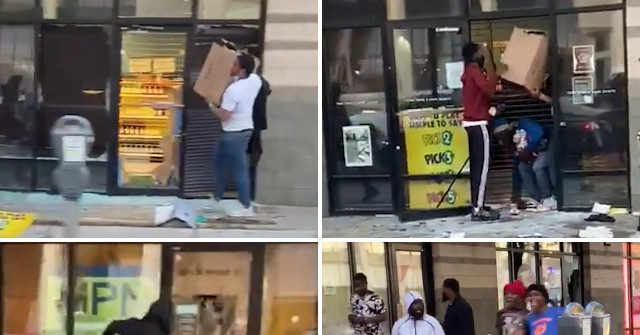 A group of children and teenagers were caught on video looting a Fine Wine & Good Spirits store in North Philadelphia Sunday amid nationwide unrest sparked by the death of George Floyd in Minneapolis.

Kristen Johanson, a crime and justice reporter for KYWNewsradio, shared footage of the looting of the liquor store at Broad St & Allegheny Ave. Looters can be seen running out of the shop carrying bottles of Ciroc vodka and wine.

Broad & Allegheny… total looting and rioting in #North Philly. They are NOT protesters. Phone knocked outta my hand as cars pulled up and people ran out to grab bottles. Seemed almost organized ⁦@KYWNewsradio⁩ pic.twitter.com/9lzjqU6B3J

Reporting live from the scene, Johanson told KYWNewsradio about the chaos unfolding in front of her. “They went into the Fine Wine & Good Spirits and this is all mostly kids,” Johanson explained, adding that looting was also occurring at neighboring businesses like the T-Mobile store. “You can smell the smell of alcohol.”

“These are kids for the most part,” the reporter continued. “I do see a couple of teenagers, but they are running in there and only one cop so far have I seen in the area in North Philadelphia.”

“There’s not a cop to be seen,” she added. “This is like little kids carrying alcohol. I see one of the big jugs that one of the kids is carrying.”

State and local governments throughout the United States increased National Guard presence on Sunday in response to ongoing protests sparked by the police-involved killing of Floyd.

Chief of the National Guard Bureau Gen. Joseph Lengyel announced that about 5,000 National Guard members had been activated in 15 states and Washington, D.C. as of Sunday afternoon with approximately 2,000 standing by.

“Responding to civil unrest is the hardest mission your National Guard does. Our unique longstanding partnerships with local civilian first responders mean we are always ready, always there to help, when needed, where it’s needed,” said Lengyel.

President Donald Trump called on Philadelphia and other cities and states led by Democrat leaders to activate the National Guard in a series of tweets on Sunday describing the protesters as “anarchists.”

Get tough Democrat Mayors and Governors. These people are ANARCHISTS. Call in our National Guard NOW. The World is watching and laughing at you and Sleepy Joe. Is this what America wants? NO!!!