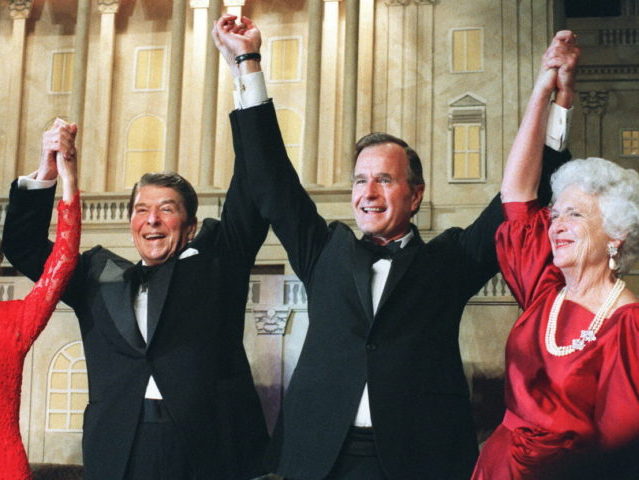 It is a scene that would be familiar to anyone watching mainstream media coverage of politics today.

A television journalist begins an interview with a member of the controversial Republican administration with a question challenging him to defend himself against the accusation that his party is secretly advancing a racist agenda. And then follows up asking why the Republican remains loyal to the GOP president when obviously this is going to hurt him in future elections.

But the setting for this exchange was not 2018. The journalist did not work for a cable news network. And it was not the Trump administration that stood accused of racism.

It was the Reagan administration. The question came from Leslie Stahl of CBS News in a 1985 interview with George Bush.

“Let me ask you a question President Reagan was asked earlier this week, and that is about the theme of the inauguration, ‘We the People,’” Stahl said. “Some people feel that the theme is really ‘We the White People.’”

“Well, I hope that’s not what the inauguration conveys,” Bush responded. “Because the answer to those who have been left behind is to have a continued recovery.”

Stahl goes on to ask Vice President Bush is his loyalty to President Ronald Reagan, who had just won re-election in a landslide, would be a liability if he wanted to run himself in 1988. It was an extraordinary question to ask, revealing how much the Washington media despised Reagan even at the height of his popularity.

“You were lampooned, to say the least, during the campaign, for being so supportive, constantly loyal. If you do decide to run for president in 1988, won’t that have hurt your image if you continue standing out, being always supportive?” Stalh asked.
Bush saw this idea that loyalty to the president would be politically damaging for the leftist fantasy that it was.

“I know there’s a fascination in some–I’d say mostly the liberal quarters–with, ‘Why is he supporting the president like this?’ But I don’t agree with that,” Bush said. “I think loyalty, as I said a while back, I don’t think it’s a character flaw.”

Times change, names change, and administrations change.  But many of the questions, particularly those that obsess mainstream media journalists, asked of Republican politicians largely remain the same.