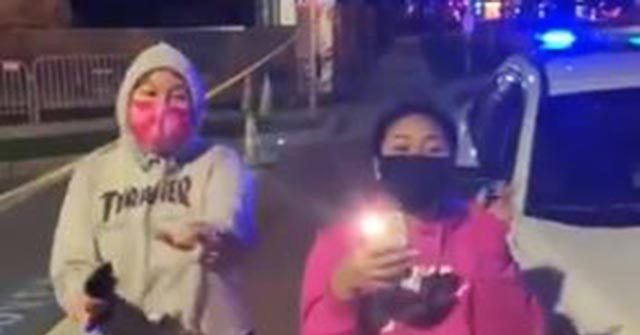 President Trump was in the Walter Reed hospital for less than 12 hours on Friday before leftists gathered outside to chant for the president’s demise.

Trump supporters waited outside the facility, praying for the president’s recovery. A contingent of his detractors grew, too.

“Fuck Donald Trump,” one woman chanted, waving her middle finger in the air:

“Your president is dying, ahh!” another woman taunted.

Others hoped for Trump’s death:

Freedom of speech yes. None the less they are miserable, disgraceful and deranged. Sad. pic.twitter.com/Baoz0ucFkU

One woman holding a “F*ck Trump” sign admitted she hopes he dies.

Here’s another angle of her taunts:

An Antifa girl showed up to Walter Reed and is chanting “Wah wah your leader’s gonna die” from across the street pic.twitter.com/6Z3Vq66xLz

Another woman held a sign that read, “Truth over lies.”

A woman said she stood outside the hospital because she is “anti-Trump”:

Biden supporter outside Walter Reed as the President is hospitalized: “We don’t care how he’s feeling” pic.twitter.com/f3lcODeHwb

“We don’t care how he’s feeling,” one of the protesters told Jack Posobiec of One America News.

The same woman was accused of confronting and cussing out children:

This lady came across, confronted, and cussed out children. Caught the tail end of it. pic.twitter.com/NWyPyHTwab

Posobiec also reported someone drove by and threw a batch of papers out of the window:

Someone drove by Walter Reed and threw printed papers all over the street that say “F*** the Trumps” pic.twitter.com/vagGdCo9Sj

They read, “Fuck the Trumps.”