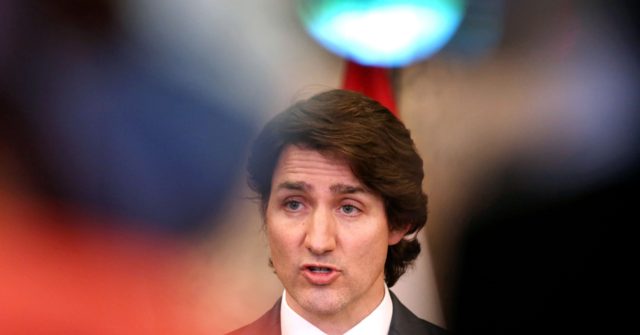 Far-left Canadian Prime Minister Justin Trudeau faced another round of heckling and widespread laughter in Parliament on Tuesday, prompting audible cackling at his use of the term “responsible leadership” after invoking the never-before-used Emergencies Act against anti-mandate protesters this week.

The Emergencies Act is a law passed in 1988 that allows for widespread federal civil rights violations in the event of violent civil unrest, terrorism, and other emergencies. The law replaced the War Measures Act which granted similar sweeping powers and was last used by Prime Minister Pierre Trudeau, the current head of government’s father, against secessionist terrorists in Quebec. The violence in 1970 that prompted such a move is almost entirely absent in the current anti-mandate movement, however, leaving many – including a large number of provincial leaders – baffled as to why the younger Trudeau invoked the act.

The “Freedom Convoy” is a series of protests led by truckers throughout Canada against vaccine mandates, mask mandates, business lockdowns, assembly restrictions, and other human rights violations by the Canadian government in the name of stopping the Chinese coronavirus pandemic. Its main form of protest is using trucks to block parts of the Canadian-American border and its largest iteration is a massive assembly in the heart of Ottawa, the national capital. Despite attracting thousands of people, the Ottawa Freedom Convoy has been overwhelmingly peaceful, with no reports of any significant violence. On-the-ground reports reveal protesters engaging in sharing food and drinks, dancing, and hosting children’s activities, giving the protests a festival atmosphere that does not match Trudeau’s attempts to equate the protesters to Nazis and terrorists.

During question time on Tuesday in Parliament, Trudeau initially faced a demand from Conservative Party interim leader Candice Bergen to give lawmakers a date on which they would deliberate on the use of the Emergencies Act, given that – contrary to Trudeau’s unilateral invocation – the law requires parliamentary input. Trudeau ignored the question.

“The scope of these measures are time limited and geographically targeted. They are reasonable and proportionate to the threats they are meant to address,” Trudeau responded, “and they are fully to be complied with the charter of rights and freedoms to reassure all Canadians that this is the right thing to move forward.”

Bergen, describing the Emergencies Act as an “unprecedented sledgehammer,” noted that Trudeau did not answer the question and accused him of stirring up “political drama.”

“He name calls people he disagrees with, he wedges, he divides, he stigmatizes,” Bergen said, “yet in spite of all of his failure, Coutts border has cleared, Windsor has opened up, provinces and police are doing their jobs and blockades are starting to come down.”

Bergen asked Trudeau to explain why he believed it was time to invoke the act now that the Freedom Convoy had moved away from blocking key international crossings with America. Trudeau attempted to answer but was met with boos and heckling.

Trudeau Heckled in Parliament: “Let Him Answer, He’s Not Good At It!” pic.twitter.com/9YJUclTrfX

“I’m trying to hear the answer and I’m having a very difficult time, there’s some shouting going on,” a frustrated Speaker of the House of Commons Anthony Rota lamented. “Maybe just keep it down and if you’ve got something that you’re not agreeing with, talk amongst yourself with someone next to you, you don’t have to shout it out to the person across the floor.”

Trudeau’s attempt at answering a second question was met with louder heckling after Rota’s intercession. When Trudeau attempted to assert that his call to use the Emergencies Act was “what responsible leadership requires,” the floor erupted in laughter.

Bergen, upon her turn to speak, joined in condemning Trudeau and his “ideological attachment to keeping Covid [Chinese coronavirus] restrictions and mandates.”

“Conservatives presented a motion yesterday asking simply for a plan, but the prime minister is in denial and is ignoring the science,” Bergen asserted. “He might as well be back at the cottage because he is doing nothing productive or constructive to end this situation.”

Bergen appeared to be referring to Trudeau disappearance to an undisclosed location when the protests began in late January. Trudeau announced at the time that he had tested positive for Chinese coronavirus and disappeared, resurfacing only to address the protesters as “tinfoil hat” wearers in a statement from his secret hideout.

The heckling resumed upon Trudeau once again attempting to respond, prompting Rota to accuse lawmakers of “bullying” the prime minister.

Maher to Trudeau: “…you do sound like Hitler.” https://t.co/yk8qU3EoiK

Trudeau’s return from the undisclosed location has been marked by ire in Parliament, where most of his appearances have been loudly interrupted by heckling. The invocation of the Emergencies Act has added confusion and disapproval from the premiers of several provinces of Canada, who Trudeau claimed he consulted before announcing the unprecedented move.

“I am concerned that there’s a certain kind of person who will hear if the federal government proceeds with this, who will be further enflamed, and that could lead to a prolongation of some of these protests,” Alberta Premier Jason Kenney lamented on Monday.

“The illegal blockades must end, but police already have sufficient tools to enforce the law and clear the blockades, as they did over the weekend in Windsor,” Saskatchewan Premier Scott Moe said, stating he “does not support” Trudeau’s measure.

The premier of Quebec, where Pierre Trudeau once used the War Measures Act, asserted that Trudeau needed to vow that he would not use the Emergencies Act on Quebec, noting that the province has not been home to any prolonged protests. The Freedom Convoy has made an appearance in Montreal, but only for one-day events.

“We don’t have any problems in Quebec so far,” Premier Francois Legault said. “I think that at this moment, it would not help the social climate. There’s a lot of pressure right now, and I think we have to be careful. We really don’t need to throw oil on the fire.”