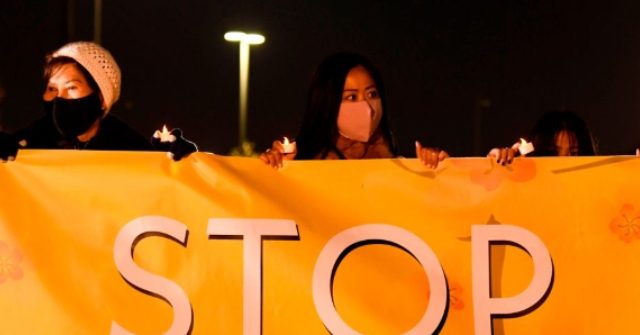 The Los Angeles Lakers and the Atlanta Hawks honored the victims of the Atlanta spa shootings on Thursday night with a moment of silence to “Stop Asian Hate.”

As Breitbart reported on Tuesday, Robert Aaron Long of Georgia, went on a shooting spree at two Atlanta-area massage parlors that left eight people dead and another wounded. Long was apprehended by Georgia State Patrol troopers after a brief pursuit.

Six persons of Asian descent were killed in the shootings, two white, and the person injured was Hispanic.

Yet, despite the fact that not all of the victims were Asian and the fact that Long stated that he targeted the spas because he saw them as facilitators for his sexual addiction, not because he was targeting Asians. The Lakers and Hawks decided to hold a moment of silence dedicated to stopping “Asian Hate.”

The Lakers held a moment of silence in honor of the eight victims of the Atlanta-area shootings.

They also shared a statement in support of the AAPI communities. pic.twitter.com/xn6rYavPIg

The Lakers are apparently having none of Long’s explanation for the attacks. Nor are they acknowledging that people of other races were killed or harmed in the shooting. Before the moment of silence, the Lakers PA announcer specifically called the shooting an act of anti-Asian racism.”

The Lakers family was saddened to hear the events late Tuesday night in Atlanta Georgia where 8 people lost their lives in an act of anti-Asian racism. As an organization, the Lakers stand in solidarity with the Asian-Americans and Pacific Islanders community and are committed to taking action towards being a part of the change we want to see take place.

At this time, please join the Lakers organization in a moment of silence for the 8 victims of this senseless tragedy.

The Hawks announcer read a statement slightly less declarative than the Lakers statement.

“Independent of the motivations, racist and gender-based crime have absolutely no place in our society and we’re committed to being an ally to communities in need,” the PA announcer said.
“Please join me in a moment of silence in memory of those whose lives were lost on Tuesday.”As of the time of this writing, Long has not backed off his claim that the shootings were not racially motivated.