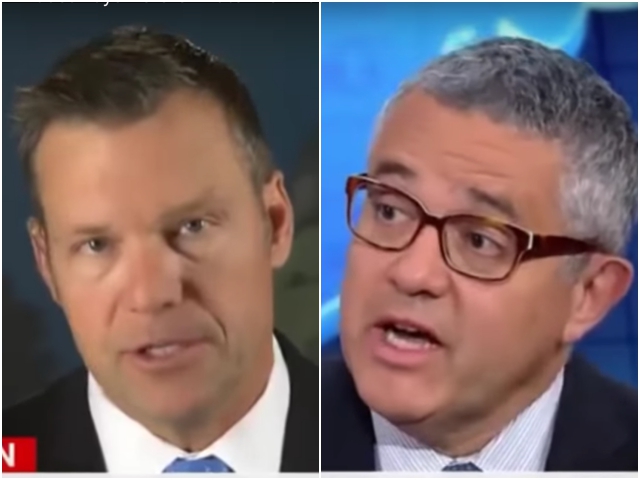 During a segment on CNN’s Anderson Cooper 360, Kobach made the constitutional case for President Trump to end birthright citizenship. In response, Cooper and Toobin attacked Kobach with unrelated insults.

Cooper even question if Kobach was a constitutional scholar, though he admitted that Kobach had graduated from Yale Law School, a school he says he could have never gotten accepted to.

“So your critics say, are you really a legal scholar,” Cooper told Kobach. “I know you did go to Yale Law School and I certainly didn’t. I couldn’t even get in, not that I applied, but I know I couldn’t if I had.”

And after defending his record of teaching constitutional law for 15 years at the University of Minnesota, Toobin accused Kobach of supporting voter ID laws in order to prevent black Americans from voting in elections.

“Kris has devoted his career to stopping black people and poor people from voting,” Toobin claimed. “I mean that’s been your goal for decades.”

“That is an absolutely outrageous accusation,” Kobach hit back. “So if you are … if you like photo ID, you’re trying to stop people of color from voting.”

To which Toobin responded, “Absolutely.”

That same Gallup poll reveals that Kobach is correct in that 77 percent of black Americans and Hispanic Americans support voter ID laws.

In Alabama’s recent statewide Senate election last year, it was proven that the state’s newly adopted voter ID law did not suppress black American turnout. To the contrary, black Americans turned out in droves to support Democrat Doug Jones in the race.

See the full transcript of the CNN segment here:

KOBACH: The key is ‘and subject to the jurisdiction thereof.’ As Jeffrey knows, all words in the Constitution have meaning. You can’t read words out of the Constitution. And so the question is, what does ‘and subject to the jurisdiction thereof’ mean? And if you look at the debate, it’s in 1866 and 1867 in the Congress, which drafted the 14th Amendment … they said it means ‘owing no allegiance to any foreign power, owing allegiance only to the United States.’ And that would mean that a person who is here temporarily, or certainly a person who is here illegally … owes allegiance to another power. In other words, is not subject to the jurisdiction of the United States. Those words have meaning. It was never intended to be if you’re born here and no other criteria is met, you get to become a citizen.

COOPER: Kris, your critics point out that the voter law that you tried to pass in your state was actually ruled unconstitutional by a federal judge … so your critics say, are you really a legal scholar. I know you did go to Yale Law School and I certainly didn’t. I couldn’t even get in, not that I applied, but I know I couldn’t if I had. But your critics say that you’re not an expert on the Constitution either. In fact, you were ordered to go to six hours of extra classes on the law by the federal judge.

KOBACH: I taught Constitutional Law at the University of Missouri for 15 years. It is often the case, in cases like this that are very controversial and where there are some grey areas in the law, that a judge will have an opinion and that judge will be overruled and then the Supreme Court will rule on it as well. I think Jeffrey would agree that just because you have a district judge who doesn’t agree with you on a case doesn’t mean that you’re not going to see a different decision come out of the Court of Appeals. That case is being appealed. And the position that the judge took, by the way, that a state cannot require voters to prove citizenship when they register, that argument was rejected by the Ninth Circuit about 10 years ago.

TOOBIN: Kris has devoted his career to stopping black people and poor people from voting. I mean that’s been your goal for decades.

KOBACH: That is an outrageous accusation.

KOBACH: That is an absolutely outrageous accusation. So if you are … if you like photo ID, you’re trying to stop people of color from voting.

TOOBIN: It is a completely true accusation because Kris, your whole career … that’s what you had this phony voter suppression commission that was such a preposterous joke established by the President that it disbanded because it couldn’t prove your claim that voter fraud is a problem in this country. Your problem is that some people vote for Democrats and you want to stop that by establishing voter requirements.

KOBACH: I’m glad we’re having a respectful argument here, this is so good for the viewers to have this.