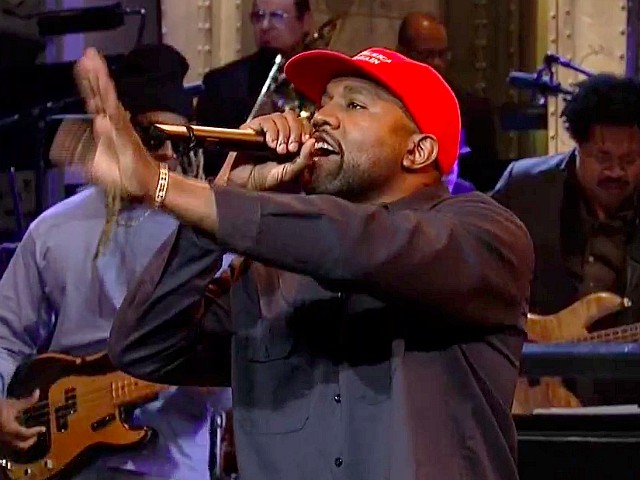 “The blacks weren’t always Democrats. You know it’s like the plan they did, to take the fathers out the home and put them on welfare. Does anybody know about that? That’s a Democratic plan,” West said, flanked by SNL cast members and his collaborative musicians Kid Cudi and 070 Shake. “There’s so many times I talk to, like, a white person about this and they say, ‘How could you like Trump? He’s racist.’ Well, uh, if I was concerned about racism I would’ve moved out of America a long time ago.”

West continued to stress America’s need for a serious “dialogue, not a diatribe.” A portion of the speech was captured by comedian Chris Rock and went viral on social media.

So when SNL cut out tonight right as Kanye was telling everybody to come back on stage, turns out he stood there for minutes afterward and incoherently ranted about his “Superman cape” red hat, Trump, and the Sunken Place. Look how awkward the cast looks. pic.twitter.com/WP67rTPswa

KANYE SNL TALK THAT GOT CUT OFF FREEDOM OF SPEECH SHOULD HAVE EXTENDED pic.twitter.com/IpULoEJxsN

At one point West said he was “bullied backstage” and was warned not to wear the hat with Trump’s campaign slogan on it. West then referred to his MAGA hat as his “Superman cape,” putting it on and telling that crowd “this mean, you can’t tell me what to do.”

“Thank y’all, for giving me this platform. I know some of y’all don’t agree but y’all be going at that man neck a lot, and I don’t think it’s actually that helpful,” West said of President Trump. “Ninety percent of news are liberal.”

“Ninety percent of TV … LA, New York, writers, rappers, musicians; so it’s easy to make it seem like it’s so, so, so, one-sided,” West continued as the music in the background hit a crescendo.
“I feel kind of free. I thought this country said that I could be me,” West began to sign as an audience member shouted “I love you Kanye!”

“I love me too,” Kanye West responded to uproarious applause from the crowd.

Tonight’s SNL performance is gonna be crazy!!!! Tune in!