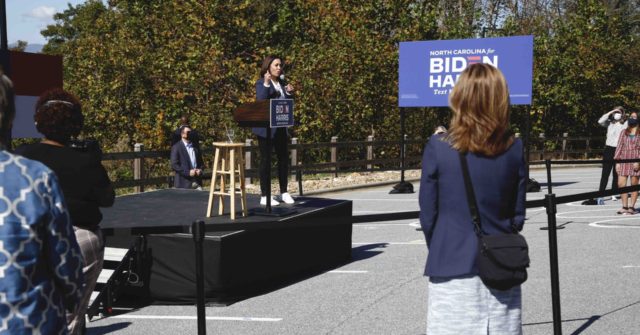 Sen. Kamala Harris (D-CA) addressed a get-out-the-vote event in Asheville, North Carolina, on Wednesday, though when the cameras panned out, there appeared to be very few supporters present.

Half a dozen supporters were visible on video coverage; the total attendance appeared somewhat greater, but not much greater.

Supporters stood inside large white circles or on “X” marks in an effort to enforce social distancing at the event.

Harris, the Democratic Party nominee for vice president, was scheduled to appear in North Carolina last week, but suspended her in-person campaign activities after two staffers connected with the campaign tested positive for coronavirus.

Wednesday’s address was billed as her return to a state that is closely contested between the two parties this year, both in the presidential race and in a Senate race, where incumbent Sen. Thom Tillis (R-NC) is facing Democrat Cal Cunningham.

Harris told those present that she and Joe Biden were “fighting for the soul of our nation,” and called the coronavirus pandemic an “accelerator,” in that it “highlighted what was wrong [with the country] before and made it worse.”

Beyond attacking the Trump administration over its response to the pandemic, Harris, who sits on the Senate Judiciary Committee, condemned Republicans for what she called an “illegitimate” attempt to confirm Judge Amy Coney Barrett to the Supreme Court before the election.