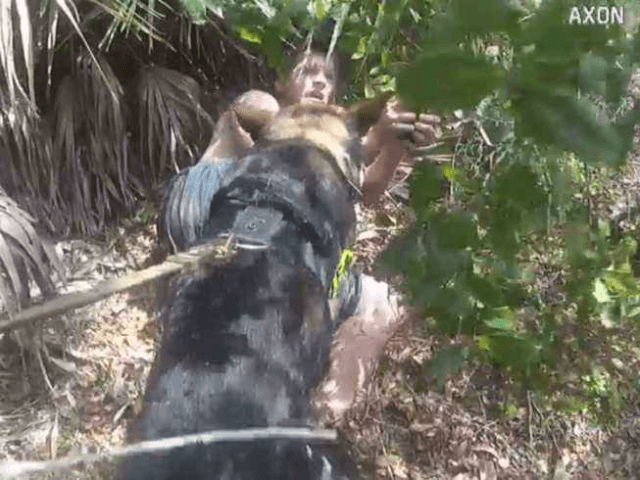 A K9 police dog in Florida scored major points with his handler Monday after he heroically took down a man accused of kidnapping an infant, according to a video from a police officer’s body camera.

The video from the Pasco County Sheriff’s Office shows the K9 named Titan, along with his partner Sgt. Ferguson, track down the suspect and pin him down while the officer ordered him to roll over on his stomach.

The suspect, whom police identified as Kevin Wilson, 24, allegedly attempted to kidnap a six-month-old from a home in New Port Richey on Monday, Fox 13 reported.

Wilson climbed up to the home’s second-floor window, where the infant’s mother let him inside before asking him to leave, WFLA reported. The suspect had argued with the woman before taking off with the infant, deputies said.

The sheriff’s office said Wilson had a no-contact order barring him from entering the home or having contact with the mother due to a domestic battery arrest in July.

The child’s uncle then confronted Wilson in the front yard at gunpoint, convincing Wilson to let go of the child and flee the scene.

The suspect crashed his vehicle while trying to escape and fled to a wooded area where Titan and Sgt. Ferguson tracked him down. The video shows Titan picking up on Wilson’s scent while a helicopter overhead followed them. Once the deputy and the K9 found him, the deputy ordered the suspect to roll over on his stomach.

“Roll over or we’re not gonna take the dog off!” the deputy yelled. “That’s a good boy, you hold that man! Roll on your stomach now!”

The deputy then arrested Wilson, charging him with interference with custody, child neglect, and violating a no-contact order. Wilson is currently in custody at the Pasco County Jail.