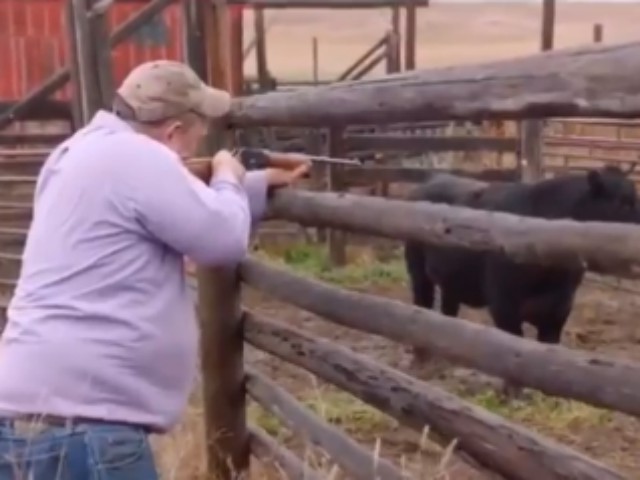 Sen. Jon Tester (D-Mont.) is great at shooting cows on his Montana land but terrible at supporting pro-gun judicial nominees for the Supreme Court.

The NRA’s Political Victory Fund downgraded Tester to “D” rating this week due to his opposition to pro-gun nominees:

#MONTANA: @NRAPVF downgraded @SenatorTester‘s rating to “D” after he voted against confirming Judge Kavanaugh to #SCOTUS. “@JonTester cannot be trusted to stand with @realDonaldTrump and support our fundamental right to self-defense,” said @ChrisCoxNRA. ➡️ https://t.co/FF62buEmH4 pic.twitter.com/e7q4pADq6V

While you were busy making your millions developing Maryland farmland, @jontester was making a living shooting hundreds of cows and hogs. So I think Montanans know who gets guns. #mtpol #mtsen https://t.co/inVR3iW3Th

This, in turn, led David Burge to opine, “Who should they cast to star in the ‘Jon Tester: Cow Assassin’ franchise?”

And a video emerged of Tester allegedly shooting a cow:

Shocked none of the outside groups picked up on the obvious cow-shooting closing argument that was hiding in plain B-roll sight. pic.twitter.com/yDhXgjO8Fk

Jon Tester, cows fear him, but anti-liberals love him.