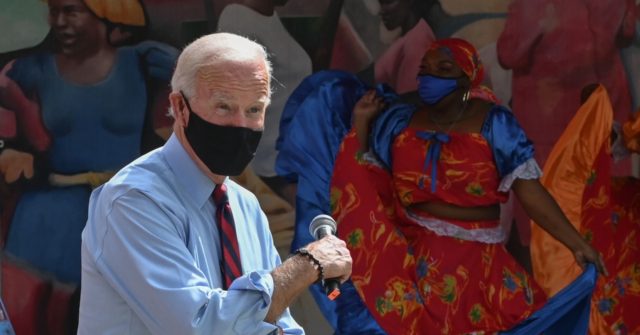 Former Vice President Joe Biden urged an audience in Miami to fantasize about what it would be like to deliver the “coup de grâce” — the final blow — in the 2020 election.

The term “coup de grâce” means “a death blow or death shot administered to end the suffering of one mortally wounded,” according to the Merriam-Webster Dictionary. Another meaning is “a decisive finishing blow, act, or event.”

As he spoke, Trump was still receiving treatment for coronavirus at the Walter Reed National Military Medical Center, though he had recovered significantly over the past weekend.

Biden was speaking at the Little Haiti Cultural Center in Miami on the last day for voter registration in Florida.

At one point, apparently trying to impress his audience with a turn of phrase in French, Biden said: “Wouldn’t it be an irony — the irony of all ironies — if on Election Eve, it turned out that Haitians deliver the coup de grâce in this election.”

The phrase raised some eyebrows online:

a ‘coup de grâce’ is a final blow or shot given to kill a wounded person or animal https://t.co/gy81uDOaxH

Biden talked about himself as a “practicing Catholic,” though he supports federal funding for abortion through birth. He told voters that if Democrats won Florida, that would likely mean winning the entire election.

Trump announced Monday afternoon that he expected to be released from hospital and to return to the White House on Monday evening.