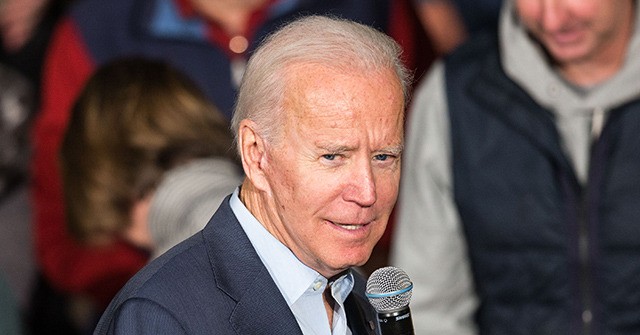 But when it came time for Biden to appear — as it was announced on Friday that he would — an error-filled, Star Wars-type scrolling text stood in his place.

“Due to recent events, Vice President Joe Biden is not able to join our program as originally planned,” it began, not clarifying whether it was referring to the mass rioting launched by left-wing activists, or with Biden himself.

These last few days have laid bare that we are a nation furious at injustice. Every person of conscience can understand the rawness of the trauma of people of color experience in this country, from the daily indignities to the extreme violence, like the horrific killing of George Floyd. Protesting such brutality is right and necessary. It’s an utterly American response.

But burninhg [sic] down communities and needless destruction is not. Violence that endangers lives is not. Violence that guts and shutters businesses that serve the community is not. The act of protesting should never be allowed to overshadow the reason we protest. It should not drive people away from the just cause that protest is meant to advance.

I know that there are people all across this country who are suffering tonight. Suffering the loss of a loved one to intolerable circumstances, like the Floyd family, or to the virus that is still gripping our nation. Suffering economic hardships, whether due to the COVID-19 or entrenched inequalities in our system. And I know that a grief that dark and deep may at times feel too heavy to bear.

I also know the only way to bear it is to turn all that anguish into purpose. So today, I ask all of America to join me – not in denying our pain or covering it over- but using it to compel our nation across this turbulent threshold into the next phase of progress, inclusion, and opportunity for our great democracy.

The statement was taken from Biden’s message posted on Medium on Sunday.