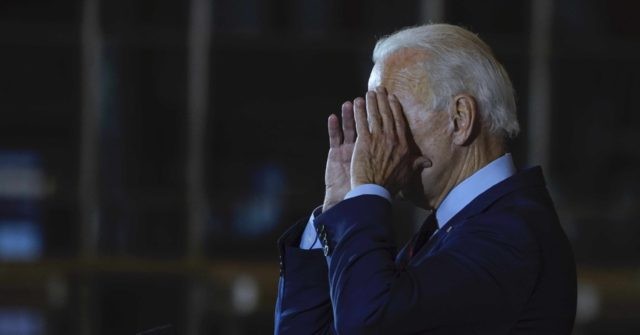 Former Vice President Joe Biden told a voter mobilization event in Cincinnati, Ohio, on Monday that President Donald Trump had ignored “systemic racism” — but he forgot a key detail in his argument.

Biden reprised many of his previous attacks against President Donald Trump, including the false claim that Trump did not condemn white supremacy in the first presidential debate, and the debunked Charlottesville “very fine people” hoax.

At one point, Biden attempted to associate Trump with the “Proud Boys” group, just as he had done during the debate — but he forgot the group’s name.

I know this nation is strong enough to both honestly face systemic racism, and strong enough to provide safe streets for our families that, too often, bear the brunt of looting and burning, which are never justified. We have no need, though, for armed militia, roaming the streets. We should have no tolerance for extremist white supremacist groups menacing our communities. You’ve been reading what’s happening in Michigan…

There is no evidence yet that the militia that was arrested last week for a bizarre kidnapping plot against Governor Gretchen Whitmer is a white supremacist group. In fact, one of them participated in Black Lives Matter protests. Another called President Trump a “tyrant.”

Remember in — I was gonna call it a debate, but — the shouting match he engaged in? When he was asked by a Fox reporter [sic] — not a left wing somebody or other — would he condemn white supremacy — He never answered the question [sic]. I said what about — well, what about those guys, that you, in fact, talk about all the time. Those boys he talks about. He said, well, I would just tell them to “stand back and stand by.” Neighborhoods I’ve worked in the black community in Delaware, that’s called a “dog whistle.”

Biden himself had brought up the “Proud Boys,” whom Trump later said he knew nothing about.

The “stand” language had followed moderator Chris Wallace’s prompt, in which he asked Trump to tell white supremacists and militias to “stand down.”

Wallace did not ask Biden about his refusal to condemn Antifa, and his belated condemnation of violence associated with the Black Lives Matter movement.

In his address, Biden repeated a false claim he had made earlier in the day, incorrectly asserting that Trump’s nominee to the Supreme Court, Judge Amy Coney Barrett, has said that she wanted to overturn Obamacare.

In fact, she had criticized the methods used by Chief Justice John Roberts to save the law in 2012, but had not stated an opinion on whether the law should be overturned.