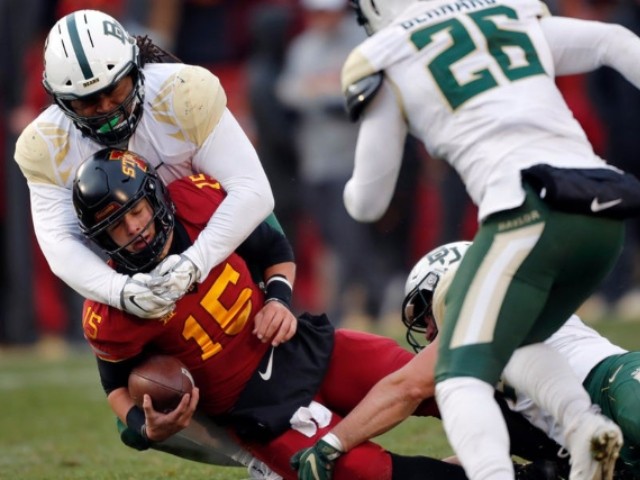 The Iowa State and Baylor game on Saturday featured a lot of action. The game had scoring, it had big plays, it had controversy, and it had a superman punch.

Yes, you read that right.

Iowa State running back and Baylor defensive end Greg Roberts, were ejected for their roles in a fight which saw Roberts jump above an official to throw a punch at Roberts:

The play on which Montgomery and Roberts were ejected came two snaps after Baylor safety Chris Miller was flagged for a late hit on Montgomery along the Iowa State sideline. Miller and Baylor cornerback Raleigh Texada knocked Montgomery over a Gatorade cart on the play.

A near fight ensued, though only a flag on Miller was assessed. Then after a 10-yard Montgomery run, he ran for one yard while Iowa State receiver Hakeem Butler pinned Baylor safety Blake Lynch to the grass during a block. That play led to a series of shoving matches, and uniformed security ran onto the field from the Iowa State sideline before Montgomery and Roberts tangled.

Officials issued a personal foul on every member of both teams, meaning that the next personal foul would lead to the ejection of any player — involved or not in the original set of scrums. Brewer, the Baylor QB, was flagged for unsportsmanlike conduct after a fourth-quarter rush that resulted in his departure from the game.

It’s not often you see the police get involved in a college football fight, but that happened. Iowa State won the game, 28-14.