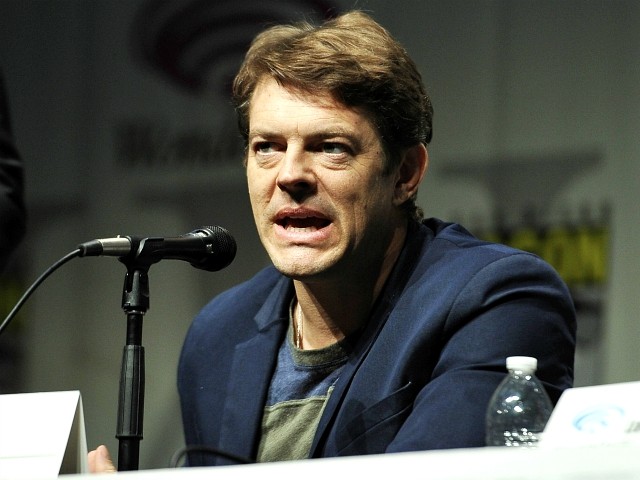 Hollywood executive Jason Blum was booed at the 32nd Israeli Film Festival in Los Angeles Tuesday evening after blaming President Donald Trump for rising anti-Semitism in the United States. One audience member was so incensed that he attempted to physically drag the Halloween producer off the stage.

Blum was presented the 2018 IFF Achievement in Film & Television Award and blamed the “end of civil discourse” on President Trump.

“Tonight we have much to celebrate with the opening of the 32nd Israeli Film Festival but at the same time today Americans went to the polls to exercise our right to vote, I have been quietly checking my phone and we’re doing pretty well,” Jason Blum began his remarks at the Steve Tisch Cinema Center in Beverly Hills. “The election results are pouring in as I speak and a lot is on the line.”

“A lot is on the line, the last two years have been hard for all of us who cherish the freedom as citizens of this country,” the BlacKkKlansman producer said, prompting some to loudly boo the Hollywood executive.

“As you can see from this auditorium, it’s the end of civil discourse,” he continued. “We have a president who calls the press the enemy of the people. Thanks to our president, anti-semitism is on the rise.”

Blum’s hit on President Trump was seemingly the final straw for Beverly Hills Pawn star Yossi Dina, who walked up to the Blumhouse Productions founder and attempted to physically remove him from the stage.
As Blum was being booed, he told the crowd, “And now I’m being physically removed, which is why Trump is not the right guy for us.”

“Shame on that crowd for booing Jason Blum. Trump’s ongoing racism inspired a murderer last week,” Apatow tweeted. “In the aftermath he continued to incite racism and hatred of the free press. He believes there are good Nazi’s. We need a President who inspires love and compassion.”

“This was an anti-Semitic act,” the president said of the massacre. “You wouldn’t think this would be possible in this day and age, but we never seem to learn from the past.”

“Anti-Semitism and the widespread persecution of Jews represents one of the ugliest and darkest features of human history,” he said.

Following the visit, Jeffrey Myers, rabbi of the Tree of Life synagogue, told CNN “New Day” host Alisyn Camerota that he found President Trump to be compassionate and engaging.

“The President was very warm, very consoling. (He) put his hand on my shoulder, and the first question he asked me was, ‘Rabbi, tell me, how are you doing?’” Myers revealed.

“And I must say, throughout the time we spent together, I was pleasantly surprised by a warm and personal side to the President that I don’t think America has ever seen,” he added. “I told my personal story of my experience which they found quite shocking and upsetting.”

In a statement to The Hollywood Reporter, the film festival’s founder Meir Fenigstein said the incident left him confounded, despite temperatures running high due to the midterm election.

“[T]his is the first time we have ever experienced anything like this and I am in total shock but I understand that this is a very tense day in American with the elections,” Fenigstein said. “This is not the place for politics and I remain apolitical.”

Speaking to reporters outside the Saban theater, Israeli actress Noa Tishby said the treatment of Blum was “unfortunate” and left her feeling “saddened.”

“What we just experienced was an unfortunate event, a lack of democracy and freedom of expression,” she said. “I am saddened by the response of the audience to the important criticism Jason Blum has voiced on stage. He should’ve been respected. I would like to apologize to Jason on behalf of the Israeli community.

“There were a lot more people in the audience who supported what he said,” added Tishby.