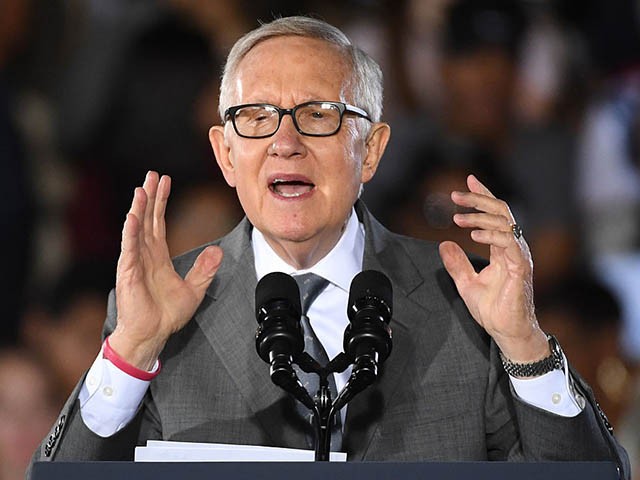 During a broader critique of the status quo of both legal and illegal immigration into America, Reid said:

If making it easy to be an illegal immigrant isn’t enough, how about offering a reward for being an illegal immigrant? No sane country would do that, right? Guess again. If you break our laws by entering our country without permission to give birth to a child, we reward that child with U.S. citizenship and guarantee a full access to all public and social services this society provides, and that’s a lot of services. Is it any wonder that two-thirds of the babies born at taxpayer expense in county-run hospitals in Los Angeles are born to illegal alien mothers?

Just when the American people think nothing can be more absurd than the way we deal — or rather don’t deal — with illegal immigration, they discover that we have a political asylum system that would qualify us for Senator Proxmire’s Golden Fleece Award a thousand times over.

I don’t know why he didn’t make this award. He should have. Last year, more than a hundred thousand people showed up in this country — landing at airports, washing up on our shores in leaky boats, crossing our borders illegally, overstaying their visas — saying two magic words: ‘political asylum’, and virtually assured themselves of being allowed to remain in the United States forever.

Anyone, no matter how specious the claim, can utter those words and within a matter of hours be released on their own recognizance onto the streets of our country with a promise that they’ll show up for a hearing eighteen months later. Can anyone really say they’re surprised that the vast majority of asylum applicants never ever show up for these hearings?

Reid added, “It is clear that there is a growing public dissatisfaction with our nation’s immigration policies. The American people are demanding reforms that will restore order to an immigration system they perceive to be out of control.”

“These are not racist people who are raising this issue,” said Reid of Americans critical of existing immigration and border security policies.