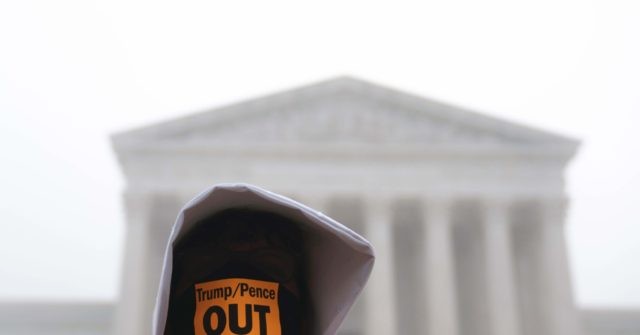 A “Handmaid” confronted Sen. Dick Blumenthal (D-CT) during a speech as Democrats attempted to address protesters on the lawn of the U.S. Capitol on the day the Senate Judiciary Committee passed Judge Amy Coney Barrett by a 12-0 vote.

“Why did you show up and legitimize the hearing?” the costumed woman heckled him. “The Democrats capitulated!”

“People need to come into the streets! … The Democrats will not stop a fascist America!” she added, interrupting Blumenthal.

The vote moves Barrett’s nomination for the Supreme Court to the full Senate for a confirmation vote next week, which she is likely to pass. Barrett is expected to fill the seat left vacant by the passing of Justice Ruth Bader Ginsburg last month.

The “Handmaid” costume is a reference to the dystopian Margaret Atwood novel The Handmaid’s Tale, in which fertile women are relegated to subservient status and controlled by a male-dominated society for reproductive purposes. The book was made into a Hulu television series that coincided with President Donald Trump’s first year in office.

Many Democrats are angry at their own Senators for not finding a way to stop Barrett’s nomination from advancing. All of the committee’s Democrats boycotted Thursday’s vote, for example, leaving behind posters of constituents who benefit from Obamacare. (Democrats claim that Barrett would support Republicans’ legal efforts at the Court to overturn Obamacare.) But Ranking Member Sen. Dianne Feinstein (D-CA) has come in for criticism after saying that she was “impressed” with one of Barrett’s answers to her questions. Senate Minority Leader Chuck Schumer (D-NY) said this week that he had a “serious talk” with Feinstein, implying that he had criticized her performance.

Blumenthal has also been criticized — though ironically, he was one of the more aggressive members of the committee in opposing Barrett. For example, during Barrett’s confirmation hearings last week, Blumenthal misquoted Barrett’s judicial opinion on the issue of felons owning firearms.