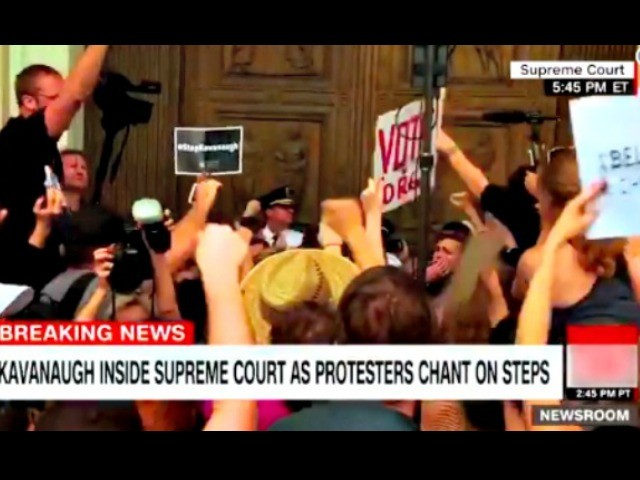 The Republican National Committee (RNC) published an ad on Thursday casting Democrats and the broader left as “an unhinged mob,” blending together comments of incitement from Democrats with video segments of violent leftist protesters.

The Left: An Unhinged Mob. pic.twitter.com/d4YhXrAsXe

On Sunday, Holder advised Democrat rally-goers in Stockbridge, GA, to “kick” Republicans who “go low,” eliciting applause from his audience:

In a Tuesday broadcast interview with CNN’s Christiane Amanpour, Hillary Clinton advised Democrats against being civil in their political pursuits while Republicans hold majorities in both the Senate and House.

President Donald Trump described Democrats and their supporters as an “angry mob” during a rally last Saturday in Topeka, KS.

The new GOP ad also features a recording of a leftist man attacking a woman demonstrating against abortion in Toronto, Canada.

Democrats and their news media allies took umbrage with Trump’s aforementioned description of them, expressing support for left-wing and partisan Democrat activists who harass Republican politicians and their supporters.

Various Republicans have accused Democrats of inciting politically motivated violence — deliberately or negligently — through rhetoric. Sen. Rand Paul’s wife, Kelley Paul, recently told Breitbart News that she now sleeps with a loaded gun by her bed as a security precaution following threats against her husband, herself, and her family.