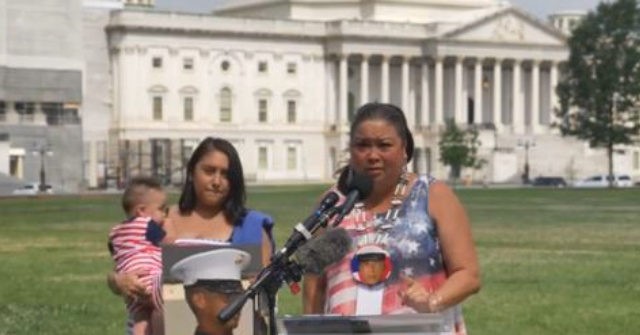 Gold Star Mom Amanda Jacobs spoke at the pro-freedom, anti-socialist “Rally for Freedom” in the nation’s capital Independence Day morning and honored her heroic son, who lost his life fighting for liberty. She reminded everyone that he — along with other fallen heroes — has given more than any athlete has ever dreamed of.

“And when I look at this country today — and I wanted to say this loud so many times: Colin Kaepernick was getting paid $14 million a year to throw a ball. My son died for $14,000 a year, and he’s given more than any football player, any athlete has ever given,” she said at the rally through tears.

“These two children right here can look at a flag and say, ‘That’s uncle Jacob,’” she said, pointing to her two grandchildren who were there alongside her.

That’s what we are here for today — not because, you know, I wanted to be a Gold Star mom. I got Gold Stars in school for making grades. But this Gold Star that I wear every day isn’t for me. It’s because of what my son chose to do — without my permission, trust me. I have a 17-year-old that is doing the same thing, and it’s because of what they believe. I hear these Marines that come to my house — they stay for four days, you know I’ve got 30 Marines that sleep on my floor, and it’s great — but they tell us that the only thing that kept them going is when they could look up and see that flag. They had hope to go back home to, and a hope that this country was going to change for the better — not for the worse.

She ended quoting powerful words from her hero son: “My son’s words were, ‘Mom, I’m not fighting for the ones in the White House. I’m fighting for you and my brothers in this yellow house.’”

“And that’s what it’s about so let’s keep America free,” she closed.

He did just that.

He was deployed to Afghanistan in late 2010 for combat, and it was during that deployment that Osama Bin Laden was killed. He came home on Mother’s Day the following year, 2011, and showed his mother a map, revealing his proximity to Bin Laden during the successful mission.

He ultimately went back as a combat replacement and, tragically, died two months later in early December with a gunshot wound to the head. Jacobs boarded a plane as fast as she could and saw her son one last time before he passed away.

He made the ultimate sacrifice.