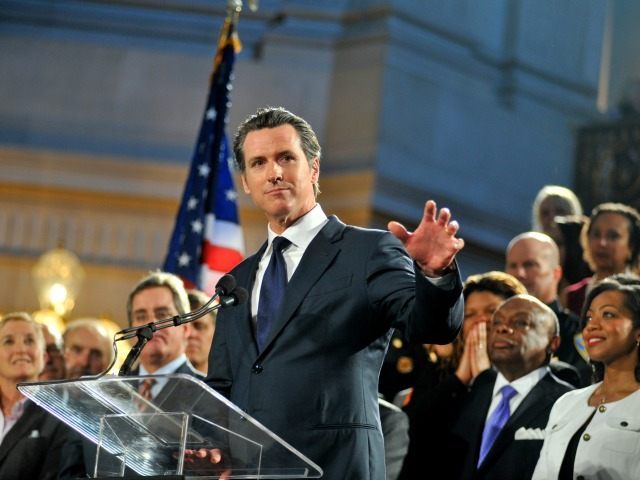 A newly released video illustrates how California first graders are subjected to political propaganda when one of their textbooks glorifies Democrat gubernatorial candidate Gavin Newsom.

In conjunction with the David Horowitz Freedom Center’s Stop K-12 Indoctrination campaign, Sean Fitzgerald exposes the political advertising and messages the young children are forced to absorb in their schools.

“The state of California is using first-grade history textbooks to indoctrinate children to support current California state politicians,” Fitzgerald says in the video.

“The passage hails Newsom as a civil rights hero for his decision as mayor of San Francisco to order the county clerk to issue marriage licenses to same-sex couples in the year 2004,” Fitzgerald notes, showing a page in the textbook that states:

Gavin said that people could marry who they choose. Sometimes, Gavin helped marry people. Some marriages were not between a man and a woman. He made sure that people’s rights were respected.

Fitzgerald says the profile of Newsom in the textbook “reads like a press release from the Newsom campaign,” and has been included in the first- grade history curriculum as a result of a California law known as the Fair Act.

Fitzgerald and the Freedom Center are advocating for a code of ethics for K-12 educators that prohibits teachers “from using their classrooms for political, ideological, or religious advocacy.”