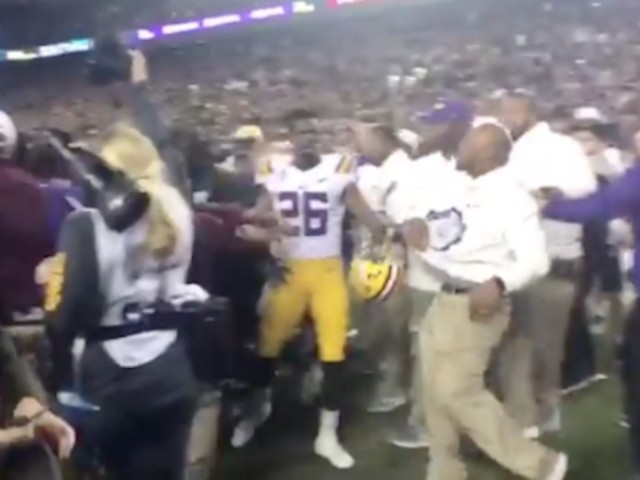 The players left everything on the field after Texas A&M and LSU played an epic seven overtime game on Saturday, that lasted nearly 5 hours.

However, the opposing coaches and staff still had some fight left in them. Literally.

As the two sides were shaking hands after A&M’s 74-72 victory, LSU Director of Player Development and former New England Patriot Kevin Faulk, got into a fist-fight with a man who appeared to be an A&M assistant coach.

POSTGAME | #LSU director of player personnel Kevin Faulk and an unknown man with what appears to be an #Aggie bench credential throw punches on the field after @AggieFootball defeated @LSUfootball in 7-OT @theadvocatebr pic.twitter.com/H7EvCNmoIv

According to an LSU account of the incident via The Big Lead, the trouble started with post-game trash talk among the coaches. Trash talk which allegedly led to an LSU assistant with ALS, Steve Kragthorpe, getting punched.

Gordy Rush, the sideline reporter for LSU radio, said on WDGL-FM 98.1 that after the game was over, Texas A&M wide receiver coach Dameyune Craig ran to the LSU sideline and trash talked. He also said the man wearing the red shirt was the one who punched Kragthorpe.

Both schools are looking into the incident.