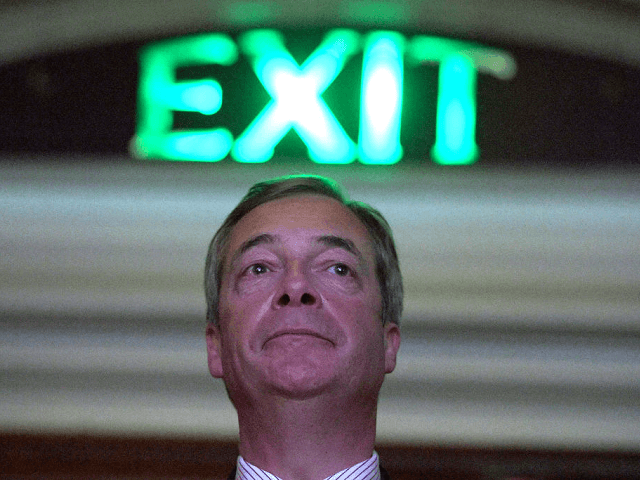 Brexit leader Nigel Farage has vented the frustration felt by many over the European Union’s refusal to compromise over Brexit Wednesday, telling Eurocrats that it is their fanaticism and bad attitude that is pushing Britain towards a full, ‘no deal’ Brexit on World Trade Organisation terms.

The comments came during a debate at the European Parliament on Wednesday afternoon, as Mr Farage stood just feet away from Eurocrats Jean-Claude Juncker and Michel Barnier, when he responded to the EU’s bull-headed refusal to compromise on Brexit.

Good stuff from @Nigel_Farage in Europarl now, The UK is dealing with fanatics who are not prepared to be reasonable pic.twitter.com/0rQ8soIbjG

Telling the European Parliament that a no-deal Brexit is now closer than ever — an outcome the European Union wish to avoid but many Brexiteers including Mr Farage see as a cherished goal — the former UKIP leader said the blame for that lay with the EU itself.

Mr Farage said: “when I hear speakers… say today they’re worried that the risk of a no deal has increased — you’re right, it has. But not because of what happened last night in Westminster, but because of the response we got from you this afternoon… Unelected bureaucrats in Brussels have been talking down to, and humiliating the Prime Minister of our nation, and we don’t like it. And even when she comes back, trying to be reasonable, saying let’s renegotiate, you’re not prepared to give an inch.

“The reason a no-deal Brexit has got a little bit closer is the sheer language and attitude, not just from the Commission, but many in the [European] Parliament towards the United Kingdom. I think public opinion would be very, very angry that there is no give today from anybody in Brussels whatsoever.

PM May Gets Mandate For Brexit Change, But EU Leaders Reject Concessions https://t.co/kyndxKm2Mg

“I think many will say, we’re simply dealing with fanatics who are not prepared to be reasonable or many any sense of compromise.”

Comparing the Brexit deal that the EU is attempting to force on the United Kingdom, Mr Farage compared it to a beaten nation capitulating after a war, and said the nation now realised signing up to that agreement would be a mistake.

Pointing out that the EU has much to lose from the United Kingdom leaving without a deal, Farage continued: “No deal means no £39bn, and your voters will be coughing up the money.

“No deal means the 100 million bottles we buy every year from Italy will become more expensive, as will three-quarters of a million German cars. So why don’t we all prepare sensibly for a no deal scenario? Why don’t we prepare to go to the World Trade Organisation and use Article 24, so we can have a two year period of no tariffs, no quotas, no restrictions of any kind, no problems or difficulties with Ireland whatsoever?”

Delingpole: Let’s Not Delude Ourselves – Brexit Is War and the EU Is the Enemy https://t.co/LAXSHJzmh2

As is typical of speeches that don’t go along with the accepted EU ideals, Mr Farage’s speech was met with groans of derision from other members in the chamber.

His comments came hours after British Prime Minister Theresa May — usually an object of scorn for Mr Farage — won a mandate from the House of Commons to go back to the European Union and negotiate limited changes to the Brexit agreement, specifically on the controversial and widely loathed Irish backstop.

The United Kingdom is due to leave the European Union, deal or not, in 58 days.

Farage: Varadkar Wants to ‘Play the Brussels Game of Threatening the British’ https://t.co/Fim4yWvNyo