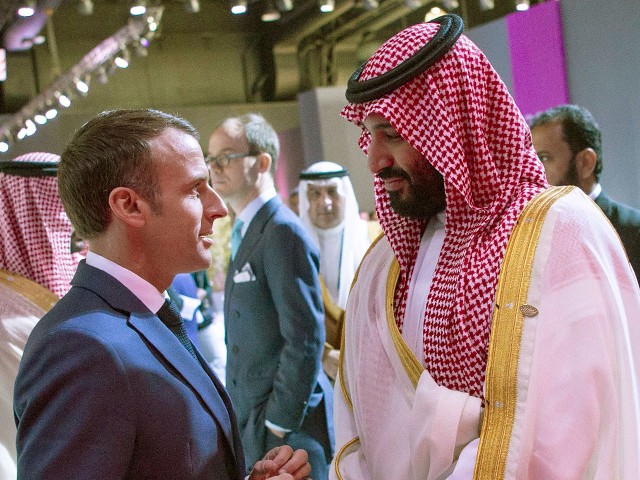 Citing a French official, Reuters reports the pair discussed the Yemeni Civil War and killing of Washington Post contributor Jamal Khashoggi during a brief intermission in the high-stakes talks.

In a video shared to Twitter via the Saudi Gazette, an irritated Macron is seen grumbling to the Crown Prince: “You never listen to me.”

#VIDEO: #Saudi Crown Prince #MuhammadBinSalman meets with French President @EmmanuelMacron on his arrival at the #G20summit venue in #Argentine pic.twitter.com/LhJrN2G2Xi

“No, I will listen, of course,” bin Salman replies, prior to bursting into laughter.

Macron, undeterred and continuing on with the conversation, later says, “I’m a man of my word.”

During the five-minute exchange, Salman is heard urging Macron not to worry, to which the French president promptly replied, “I am worried.”

Macron’s office said the meeting with MbS [was] justified because European nations wanted to send a united message about the need for probity in the investigation and were not going to sidestep an opportunity to reinforce that message during the G20.

Earlier, the Elysee said the video showed “a sort of contrast between MbS’s face sporting an embarrassed smile and the (French) president’s face, which was rather stern, and was keen to convey these messages in a very firm manner”.

Overall the exchange appeared cordial, with Macron attempting to get his point across, speaking with his hands in front of him and looking MbS in the eye. MbS nods repeatedly and appears accommodating and somewhat apologetic.

Macron’s tense interaction with Salman was in stark contrast to his warm embrace of Russian President Vladimir Putin, who high-fived and shared a laugh with each other at the summit’s start.

WATCH: President Putin and Mohammed Bin Salman shake hands and laugh before sitting next to each other at the G-20 summit https://t.co/ARRKebhfR5 pic.twitter.com/UnwufgeGGX

Putin and the Crown Prince are slated to meet during the annual gathering to talk about Khashoggi’s murder and oil production. In a statement to Russian news outlet TASS, Kremlin official Yuri Ushakov said of the meeting: “The political dialogue [between Russia and Saudi Arabia] is regular and substantive. On October 5, 2017, Saudi King Salman bin Abdulaziz Al Saud for the first time made a visit to Russia. Vladimir Putin’s possible return visit to Saudi Arabia is on the agenda.”

During the course of the day, President Trump “exchanged pleasantries” with Salman, telling reporters that while they didn’t talk about hot-button issues concerning the U.S. and Saudi Arabia, it was possible the pair would do so as the summit rolled on.

“We had no discussion. We might [later], but we had none,” President Trump told the press pool.