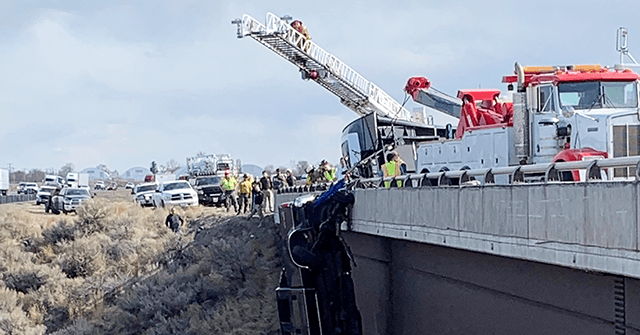 A truck dangling from a bridge outside Twin Falls on Monday turned into a heroic rescue operation, according to Idaho State Police Troopers.

“The driver of a 2004 F-350 pickup pulling a 30-foot camp trailer lost control and began to swerve across the road. He knocked out a guard rail and drove off the bridge,” the outlet said.

The Idaho State Police (ISP) shared a photo Monday of first responders on the bridge:

When a trooper arrived at the scene, the truck was hanging from a safety chain hooked to a camping trailer and hanging 80 to 100 feet above the gorge floor.

“The trooper called out to the couple inside the vehicle, who were reportedly held in place by their seatbelts. They replied that they were alright and not seriously hurt. Two small dogs were inside as well,” the East Idaho News article continued:

A deputy with Gooding County Sheriff’s Office arrived a short time later. The trooper and the deputy got another set of chains from a semi-truck driver and attached them to the dangling pickup to strengthen its hold until rescue crews got there. It wasn’t long before the Magic Valley Paramedics Special Operations Rescue Team arrived. They rappeled off the bridge and attached a harness to each victim before pulling them and the dogs to safety.

The victims’ names were not made public but they are reportedly from Garden City. The driver was a 67-year-old male and the passenger a 64-year-old female. The couple was taken to a hospital with non-life-threatening injuries and the dogs were transported to a family member’s home.

“This was a tremendous team effort that took a quick response and really showed the dedication and training of our community of first responders,” Capt. David Neth of ISP’s District 4 in Jerome said of the operation.

“This is something we train and prepare for, but when it happens and people’s lives literally hang in the balance, it takes everyone working together, and then some,” he explained.