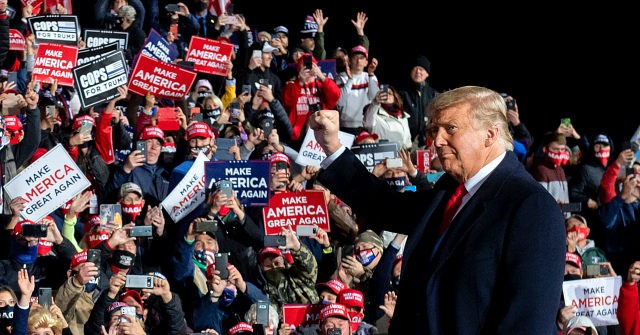 President Donald Trump’s microphone cut out for a moment during his rally Tuesday night in Erie, Pennsylvania, and he jokingly blamed it on “Crooked Hillary.”

As the president spoke about his endorsements from law enforcement agencies across the nation, his mic went off.

The crowd appeared to chant, “Trump! Trump! Trump!” while they waited for it to come back on.

Moments later, the president stepped back up to the podium and said, “Is the mic ready? Yes,” while the audience cheered.

“I wonder who did that to our mic?” He questioned.

“I don’t believe it was Joe. You know who it was? Crooked Hillary, must have been,” he commented, adding, “I think it was probably crooked Hillary.”

“The president pointed to new stories published in the New York Post on Friday revealing more details of Hunter Biden pursuing lucrative foreign deals while his father was vice president,” the article read.

Trump added that it made “crooked Hillary Clinton look like an amateur.”