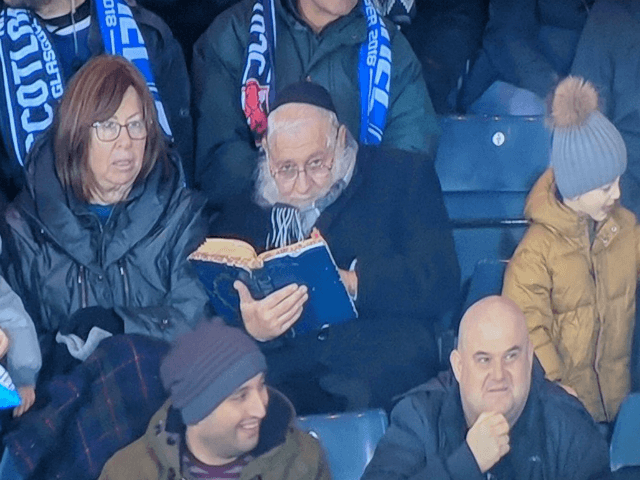 TEL AVIV – The old adage “Football is life. The rest is mere details” clearly doesn’t ring true for one rabbi who was caught on a stadium camera at an Israel-Scotland game in Glasgow deep in Talmudic study just after the away team scored a goal.

Rabbi Zev Leff became a viral sensation overnight and the subject of memes and tweets when the camera caught Rabbi Leff alongside his wife and grandchildren, his face buried inside a Gemara after Israel scored its first goal.

“I think he missed the goal,” one of the commentators quips. The camera doesn’t move, and neither does the Rabbi.

Must be a good read,” another one chimes in.

Rabbi Leff was in Glasgow visiting his daughter, Rebbetzin Sarah Bodenheim and her family.

“My children were eagerly awaiting this game and all their friends were going so my father said he’ll  join them just so he could spend more time with them,” Rebbetzin Bodenheim told Channel 2 News.

When you’ve got football at 7, but Maariv at 8 #SCOISR pic.twitter.com/Y3opdikoDj

Bodenheim’s husband then said his phone started pinging with the sounds of text messages from friends telling him what transpired.

His wife interjected, “We’re used to seeing our father like that. It’s not even weird for us. Our father takes the Gemara with him everywhere, even the supermarket. Every time he has a spare moment he sits and learns.”

Clearly #Israel needs all the help we can get in the football match against #Scotland happening now! #SCOISR pic.twitter.com/3VOaI4MhvF

The Channel 2 anchors then joked that if the rabbi was supplicating to God during the match, why didn’t Israel beat Scotland instead of losing 3-2?

During the same game, the Israeli soccer players were applauded by fans for taking off their jackets and giving them to their mascots who were shivering in the chilly Scottish weather.

What about all the Israel players giving their jackets to the shivering mascots? 👏🏻 👏🏻
What a lovely touch.
I remember being in the tunnel when Gordon Strachan took time out from his pre-match duties to arrange cold weather kit for the kids in similar conditions. Class. #SCOISR pic.twitter.com/9C7updrMaY