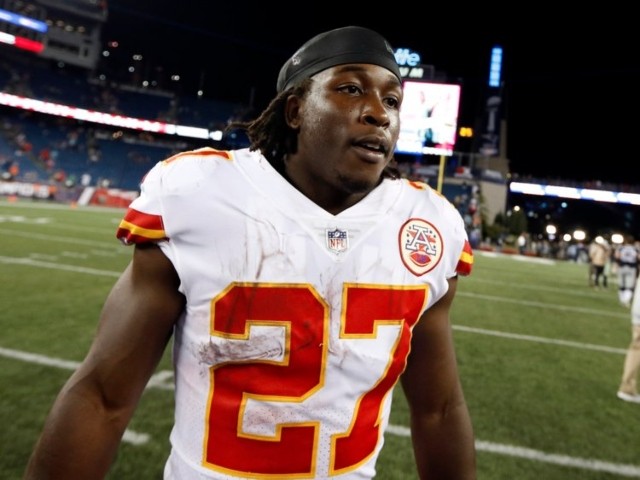 TMZ has obtained video of Kansas City Chiefs running back Kareem Hunt, brutally attacking and kicking a woman in the hallway of a hotel.

In the video, Hunt can be seen having an argument with a young woman in the hallway outside of his hotel room. The incident occurred at 3:22 in the morning, on February 18, 2018. Which means the incident occurred only two weeks after the Super Bowl and well before the start of the current NFL season.

Despite that, the NFL elected to not suspend Hunt for the attack.

Hunt turns a corner and confronts the woman, shoving her hard. The woman strikes him back in the face … and that’s when Hunt goes berserk.

As friends try to hold him back, the 2017 Pro Bowler — who led the league in rushing yards — explodes and knocks one of his friends into the woman … who both go flying into a wall.

Both Kareem’s male friend and the woman appear dazed — but Kareem makes his way over to the female and kicks her while she’s crouching on the ground … knocking her over.

Police took the video into evidence, but did not arrest Hunt. Because, they were unable to determine if a crime had actually occurred.

“At the time of the incident, the woman told police the whole thing started because Kareem kicked her out of his room after she refused to hook up with one of the men in Kareem’s entourage,” TMZ reports.

However, Hunt’s entourage claims that the woman became irate when asked to leave the hotel room, and then called the Chiefs running back the n-word.

The NFL has not responded to TMZ’s request for comment.