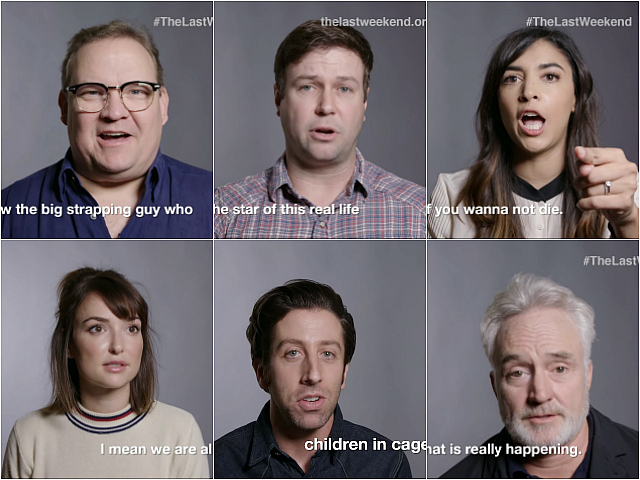 Another group of Hollywood celebrities has come out with a get out the vote ad, this time driving a left-wing message attacking President Donald Trump for “keeping children in cages,” despite the fact that the same immigration policy was implemented during the Obama era.

The ad is titled, “The Last Weekend,” and is aimed at getting Americans interested in voting.

The theme of the ad takes viewers through an action movie scenario called, “The Last Weekend,” but then segues into the fact that this really is the last weekend before Election Day. The stars then urge fans to volunteer for the partisan “Swing Left” campaign to get liberal voters to the polls by November 6.

Why should we vote? Well, according to these stars we are “fighting” against Russian bots, voting to secure “a woman’s right to choose” (as long as they don’t choose life), and fighting against “our government keeping children in cages.”

Of course, none of the stars mention that this policy of detaining children brought here illegally by foreign migrants is a policy that has been around since the late 1990s and that Barack Obama also kept “children in cages” as their status was cleared up.

In fact, one of the reasons children are separated from the adults that bring them into the country is because often these kids are being trafficked and used as shields by people who turn out not to be the kids’ parents. Indeed, during the Trump administration arrests for human trafficking have surged.

“Through late June 2018, human trafficking arrests for the year approached 6,000. That’s nearly double the year prior (which itself marked an all-time high), and triple the year before that,” Political Insider reported. “Human trafficking-related arrests never topped 2,000 under the Obama administration and were a paltry 300 in 2010.”