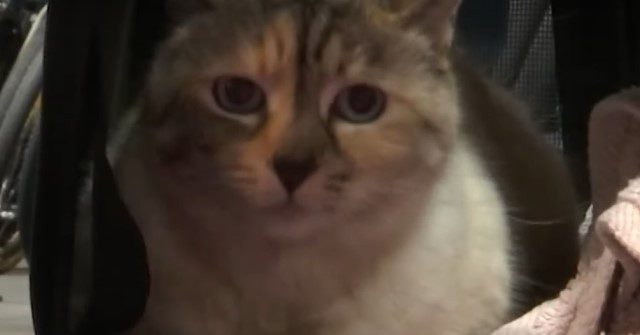 It was an emotional moment for a family whose cat traveled over 2,000 miles to reunite with them after they thought she was gone forever.

The cat, whose name is Ebi, went missing eight years ago and was scooped off the street last month in Riverside, California, the Knoxville News Sentinel reported Wednesday.

A microchip helped locate the animal’s owner, now living in Knoxville. The family moved there after she went missing years prior.

The touching reunion took place inside the Bearden Bike & Trail shop where Ebi was seen riding in a pink pet carrier held by John Welsh, who brought her from Southern California for the big moment:

The initial phone call was a big surprise for Joe Drnec and his wife Leanna of Bearden. He said, “It brought my whole family to tears.”

Welsh, who works for the Riverside County Department of Animal Services, explained that not many impounded felines are placed back with their owners.

“It’s not something we could do every day, obviously,” he noted when speaking of the journey. “But this was important because … it’s a good way to promote microchipping, particularly for cats.”

In a social media post on Wednesday, the animal services agency shared a video of Ebi getting ready to board a plane:

❤️❤️❤️❤️❤️We are about to go into airplane mode, so please forgive us if we do not post about Ebi for a bit. PHX-to-Nashville leg about to begin. County of Riverside – Government Phoenix Sky Harbor International Airport Southwest Airlines #Cali2Tennessee #knoxvillebound #petREUNION #valentinesweek ❤️❤️❤️❤️❤️ WSMV News 4, Nashville WCBI News

The family had adopted her from a shelter in Riverside and Ebi wanted to be free to roam, so the couple supervised her outdoors until she was able to explore alone.

A year passed and when she did not return one day, the family thought they would never see their beloved pet again.

In a recent photo, Ebi appeared to be happy and healthy:

“Back then, she was just full of kitten energy,” Drnec stated, adding, “Now, I think she’ll make a much better inside cat. I’m not about to risk losing (her) by letting her outside again.”